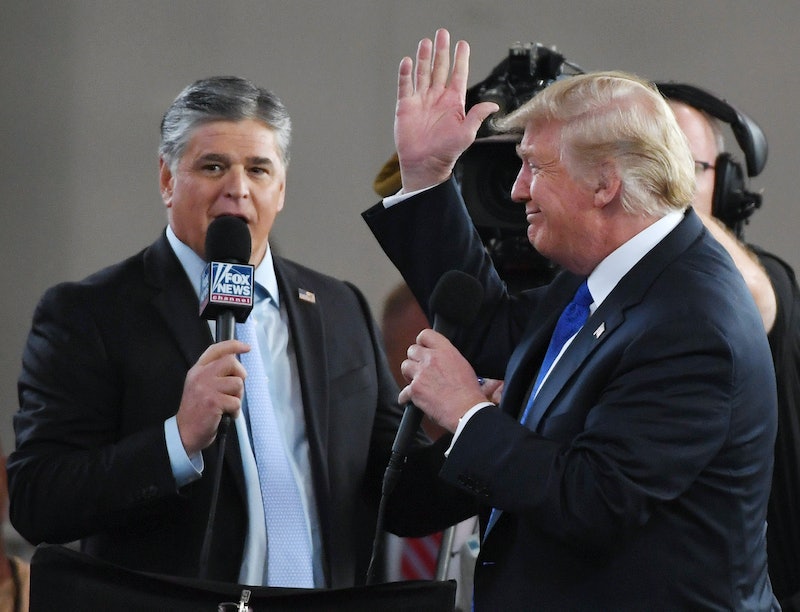 On Wednesday, after the Democratic National Committee said it planned to bar Fox News from hosting the Democratic primary debates, Trump suggested he might boycott some 2020 debates in response. The apparent retaliation came within hours of the committee's announcement, with POTUS calling out "Fake News Networks" and "Radical Left Democrats" in particular.

Bustle has reached out to the White House for comment. In a statement to the Washington Post on Wednesday, DNC Chairman Tom Perez explained the reasoning behind the decision to reject Fox News as a primaries debate host this summer. Perez said:

I believe that a key pathway to victory is to continue to expand our electorate and reach all voters. That is why I have made it a priority to talk to a broad array of potential media partners, including Fox News. Recent reporting in the New Yorker on the inappropriate relationship between President Trump, his administration and Fox News has led me to conclude that the network is not in a position to host a fair and neutral debate for our candidates. Therefore, Fox News will not serve as a media partner for the 2020 Democratic primary debates.

We hope the DNC will reconsider its decision to bar Chris Wallace, Bret Baier and Martha MacCallum, all of whom embody the ultimate journalistic integrity and professionalism, from moderating a Democratic presidential debate. They’re the best debate team in the business and they offer candidates an important opportunity to make their case to the largest TV news audience in America, which includes many persuadable voters.

Additionally, in response to Perez's statement, Trump wrote on Twitter, "Democrats just blocked @FoxNews from holding a debate. Good, then I think I’ll do the same thing with the Fake News Networks and the Radical Left Democrats in the General Election debates!"

It's not clear if the president means he's going to block certain networks from airing the general debate, or if he's going to boycott attending the debate, himself. Regardless of which translation is true, he has both boycotted debates and barred certain outlets from press briefings in the past.

As the New York Times notes, Trump boycotted a primary debate in 2016, on the grounds that he objected to Megyn Kelly being the moderator. What's more, in February 2017, the White House appeared to bar a number of news organizations from a press briefing, including the Guardian, the New York Times, Politico, CNN, BuzzFeed, the BBC, the Daily Mail, and more. As reported by the Guardian, the following conservative-leaning publications were all allowed to attend the off-camera presser, which had replaced the daily briefing: Breitbart News, the One America News Network, and the Washington Times. TV networks like CBS, NBC, Fox, and ABC also had access to the meeting.

In response to this news, per the Guardian, a spokesperson for the White House said, “Claims that outlets were excluded are not factual.” However, several individuals disagreed with that statement. The White House Correspondents' Association condemned the act, saying in a statement acquired by the Washington Post, "The board will be discussing this further with White House staff." Similarly, the editor of the New York Times claimed that an incident of exclusion such as this one had never happened to the publication "in our long history of covering multiple administrations of different parties," per the Times.

For now, the DNC has not given any indication it will change its policy on Fox News' involvement with the Democratic primaries.