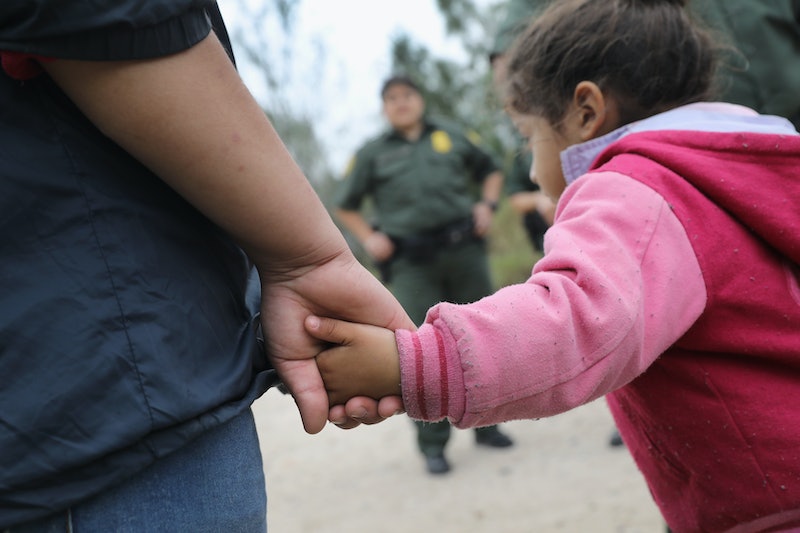 Since Donald Trump became president, the Trump administration has reportedly separated hundreds of families at the U.S.-Mexico border. As a result, the administration has spent months looking for a housing solution for migrant children who are separated from their parents. At the moment, officials are reportedly evaluating military bases in Texas, where Trump might create tent cities for migrant children.

In an exclusive report published earlier this week, the D.C.-based McClatchy news service cited unnamed U.S. officials as saying that the administration is thinking about building a tent city to house anywhere from 1,000 to 5,000 children. According to Vox, the Department of Health and Human Services already has 11,000 immigrants under the age of 18 in its custody, and is consequently at 95 percent capacity. That's why the Trump administration is now considering what HHS has described as "temporary shelters" — or what McClatchy described as a "tent city."

The HHS is currently responsible for taking care of “unaccompanied alien children” — which is what undocumented immigrants under 18 become once the Trump administration transfers their parents to criminal custody. This is all part of the administration's new "zero-tolerance" immigration policy, which according to CNN entails bringing criminal charges against every adult immigrant who crosses into the U.S. without the necessary documents. As Vox pointed out, immigrants who face these criminal charges are sent to a federal jail — where they are not allowed to keep their children with them.

The proposed tent city is already under backlash from Trump administration critics, who have described it as a "prison camp." According to USA Today, the number of unaccompanied migrant children in the U.S. government's custody has increased by 20 percent since Trump administration officials — specifically Attorney General Jeff Sessions and Homeland Security Secretary Kirstjen Nielsen — instituted the "zero-tolerance" policy last month.

Consequently, HHS only had 575 open beds left in its existing shelters as of the end of May, HHS spokesman Kenneth Wolfe told The Independent. Administration officials are specifically looking at the Fort Bliss army base near El Paso, Texas as a possible site for a tent city, as well as air force bases in Abilene and San Angelo.

Sessions has been a driving force in the institution of the Trump administration's "zero-tolerance" immigration policy. In a recent interview with conservative radio host Hugh Hewitt, Sessions defended the policy, which has already received intense criticism from human rights advocates.

"If people don’t want to be separated from their children, they should not bring them with them," Sessions told Hewitt. "We’ve got to get this message out. And you can’t be giving immunity to people who bring children with them recklessly and improperly and illegally. You will be prosecuted if you ... come illegally. And if you bring children, you’ll still be prosecuted."

According to Mic, HHS currently has approximately 100 shelters across 14 states dedicated to housing unaccompanied migrant children. The so-called tent cities that the Trump administration is thinking about creating would supplement these shelters, providing a mix of year-round housing and temporary accommodation.

Theoretically, Vox reported, unaccompanied immigrant children are supposed to be housed in government facilities or short-term foster care only until the government can locate a family member or sponsor that can take them in while their family's immigration case is resolved. However, the Office of Refugee Resettlement — which falls under HHS — has been overloaded for years, and the ACLU has alleged that many migrant children have faced “verbal, physical, and sexual abuse” in the custody of Border Patrol agents.

The number of unaccompanied migrant children housed in HHS shelters has been rapidly increasing since Barack Obama's second term, according to The New York Times. In what Obama described as an "urgent humanitarian situation," escalating violence in El Salvador, Guatemala, and Honduras caused a surge in the number of migrant children crossing into the U.S. starting in 2014.