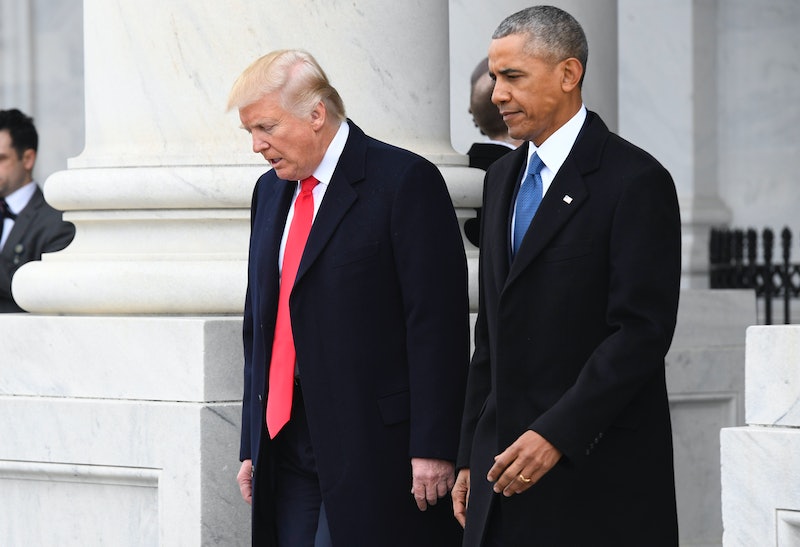 "We get along," Donald Trump said in February of his relationship with former President Barack Obama. "I don’t know if he’ll admit this, but he likes me. I like him because I can feel it. That’s what I do in life — it’s called like, I understand." Well, things have certainly changed in span of four months. According to CNN, Trump and Obama's relationship has languished in a frosty silence since the inauguration.

The tension between the two is unprecedented, CNN reported; never before has the relationship between a sitting president and his predecessor been so distant. Some in their close circles would argue that it's not just distant, but nonexistent altogether. In fact, former Obama senior adviser David Axelrod told CNN, "I don't think they have a relationship."

The strain between the two men predates the 2016 election. Trump was the most high-profile proponent of the racist birther conspiracy theory that Obama was born in Kenya. Trump repeatedly appeared on national television claiming he didn't believe Obama was born in Hawaii, and at one point even even asked hackers to obtain the former president's college records and check the "place of birth" section. Obama memorably roasted the businessman for spreading the conspiracy during the 2011 White House Correspondents Dinner. And Trump's Twitter account, which he created in 2009, is filled with dozens of tweets insulting his predecessor throughout the years.

After the peaceful transfer of power following Election Day — Trump happily shared that he'd been left a "beautiful letter" from Obama on the presidential desk at the Oval Office — things quickly took a nosedive. Trump resumed his old habit of criticizing Obama policies on Twitter and eventually accused his predecessor of having wiretapped Trump Tower during the election. There has reportedly been zero direct communication between the two men since Inauguration Day.

What makes the absence of a relationship here so odd is the fact that American presidents, regardless of political party, typically reach out to their predecessors for guidance. Yet while Trump often seeks the advice of businessmen, foreign leaders, and friends, Obama is not on the list of people he's reached out to. Even John F. Kennedy and Dwight D. Eisenhower overcame their hostile feelings about one another to regularly convene and discuss presidential matters.

According to PEOPLE, Obama reportedly referred to his successor as "nothing but a bullsh*tter" in a conversation with friends last November. It's not difficult to imagine that Trump's post-inauguration antics have reinforced this opinion and made the chances of a working relationship even weaker than they were before.