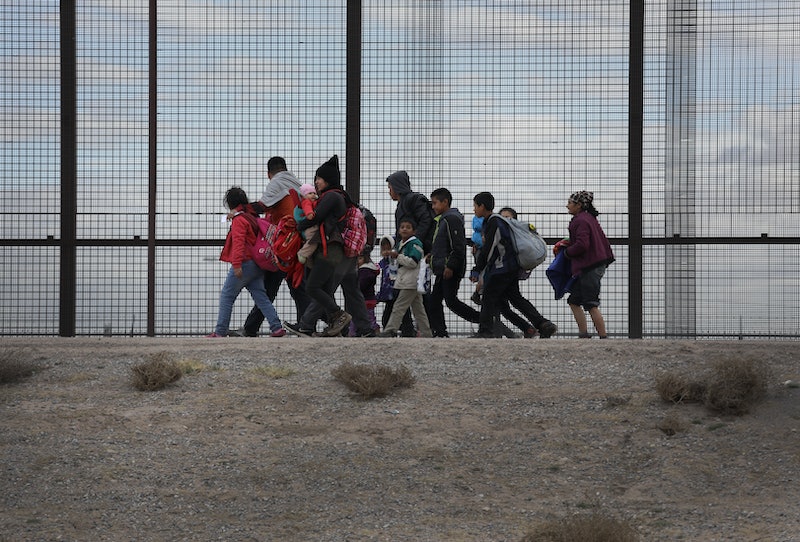 Through a new Department of Housing and Urban Development proposal, President Trump plans to evict undocumented immigrants from public housing — and, in doing so, 55,000 children could end up without homes. The new rule was published Friday in the federal register, and an internal analysis conducted by HUD obtained by the Washington Post found that it would result in tens of thousands of kids with legal immigration status being evicted from their homes.

HUD acknowledged the legitimacy of the analysis to the Post. Bustle has reached out to HUD for comment.

Although current regulations prohibit undocumented immigrants from receiving federal housing subsidies, family households may receive such subsidies so long as one occupant, often a child or spouse, is legally a U.S. citizen or resident. If approved, the new rules will eliminate this provision, the Post reports, effectively banning all households with one undocumented immigrant from receiving federal subsidies.

Although the rule hasn't been finalized, HUD conducted an analysis of its projected impact, and found that it would likely result in 55,000 children who are U.S. citizens, or legal residents, getting evicted; this would be children who themselves are eligible for public housing subsidies, but live with somebody who isn't. An addition 21,000 adults with legal immigration status would be kicked out under the new rules, HUD found.

“HUD expects that fear of the family being separated would lead to prompt evacuation by most mixed households,” HUD's analysis said. “Temporary homelessness could arise for a household, if they are unable to find alternative housing.”

The new regulation would not save money; in fact, it would cost between $193-$227 million a year, according to HUD's analysis. This is because the newly-vacated housing would be filled with families in which every member qualifies for housing subsidies. Because subsidies are doled out on a per-person basis, the families that filled those houses would be receiving more in subsidies than the families they replaced. HUD's analysis predicted that Congress wouldn't provide this extra money; as a result, the Department said, it would have to "reduce the quantity and quality of assisted housing in response to higher costs."

"With part of the budget being redirected to cover the increase in subsidy, there could be fewer households served under the housing choice vouchers program," the HUD analysis says. "[F]or public housing, this would have an impact on the quality of service, e.g., maintenance of the units and possibly deterioration of the units that could lead to vacancy."

UnidosUS, which identifies as the biggest Latino civil rights and advocacy organization in the country, emailed a statement in response to the new HUD proposal, calling it "indefensible." The statement by UnidosUS Senior Policy Advisor Carlos Guevara reads,

This proposed housing rule has a singular purpose and that is to sow fear and division and create confusion in our communities. It’s another example of how this administration, led by the likes of Stephen Miller, is intent on going after American families—intent on separating parents from children and causing unnecessary hardship. Pushing children into homelessness is indefensible. HUD should be focusing on reducing homelessness, not increasing it.

However, HUD Secretary Ben Carson tweeted about the new rule back in April, before it was published, characterizing it as "putting America's most vulnerable first." It's unclear whether he wrote this before or after his determined that the policy would result in 55,000 children with legal status being evicted.

The rule was pushed by senior White House Adviser Stephen Miller, according to the Post, who was also reportedly the driving force behind the Trump administration's family separation policy. It will be viewable online and open for public comments for 60 days before it's implemented.