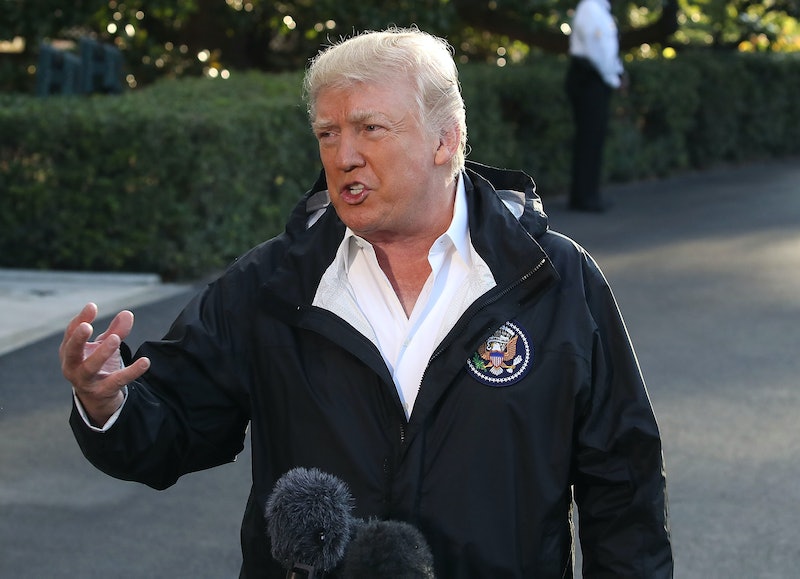 Speaking with reporters before heading to Puerto Rico on Tuesday morning, President Trump said "what happened in Las Vegas is in many ways a miracle" in praise of the police response, after calling the mass shooting that occurred Sunday a "tragedy."

Referring to the first responders, Trump appeared to be complimenting their rescue efforts in referring to the deadliest gun attack in modern American history as a "miracle."

Trump went on to say, "we'll be talking about gun laws as time goes by. But I — But I do have to say how quickly the police department was able to get in was really very much of a miracle."

Given the stockpile of weapons found in the gunman's hotel room, the number of casualties could have been much higher. Police also came upon the shooter while he was still alive, which means their quick response almost certainly shortened his planned attack. These appear to be the reasons for Trump's assessment of Las Vegas as a "miracle." The police's fast response and early shutdown of the shooter does absolutely warrant praise.

Nevertheless, Trump's choice of word will almost certainly be deemed as insensitive by many who will hear it as an inappropriate characterization of such an enormous tragedy.

This is not the first blunder in word choice for the president. Despite his claims to "have the best words," Trump has often come under criticism for his unclear or questionable choices in the diction department.

One of the more recent examples came in the wake of the violent white supremacist rally in Charlottesville, Virginia. After a rocky first reaction from Trump to the unrepentant racism on display during an August rally and the murder of counter-protester Heather Heyer, Trump doubled down. After ascribing blame to both sides, the president said, "You had some very bad people in that group. You also had some very fine people on both sides." This led many to ask what sort of "very fine people" would inadvertently find themselves amongst neo-Nazis and then decide to stay along for the ride.

An even more recent case is Trump's labeling of a supposedly hypothetical NFL protester as a "son of a bitch." The remark came while Trump was lashing out against the decision on the part of some professional athletes, most of them black, to kneel or raise a fist during the national anthem in protest of police brutality and inequality in America. The racial connotation of Trump's term did not go unnoticed. The president has not apologized.

Trump has also come under fire during the last week for his tweets about the devastation in Puerto Rico following Hurricanes Irma and Maria. Many noted that he spent far less time talking and tweeting about the catastrophe confronting over 3 million American citizens in Puerto Rico as compared with his focus on Houston and south Florida following Hurricanes Harvey and Irma. Trump also brought up Puerto Rico's debt as a possible factor that could sway decisions about rebuilding efforts.

And on Saturday, Trump went after the mayor of San Juan specifically, blaming her and other Puerto Ricans for wanting "everything to be done for them."

Plenty of people did not agree with Trump's response to Puerto Rico's relief efforts, especially given that at least 16 people are confirmed dead, a number likely to rise given that figure hasn't been updated in six days. Most of Puerto Rico remains without power or running water.

Trump's praise of first responders in Las Vegas is deserved. There were dozens who risked their lives, without hesitation, and their courage helped avert greater suffering. Such heroism may indeed be called a "miracle." But it will spark debate about timing, wording, and the president's capacity to prioritize empathizing with those who are in pain.