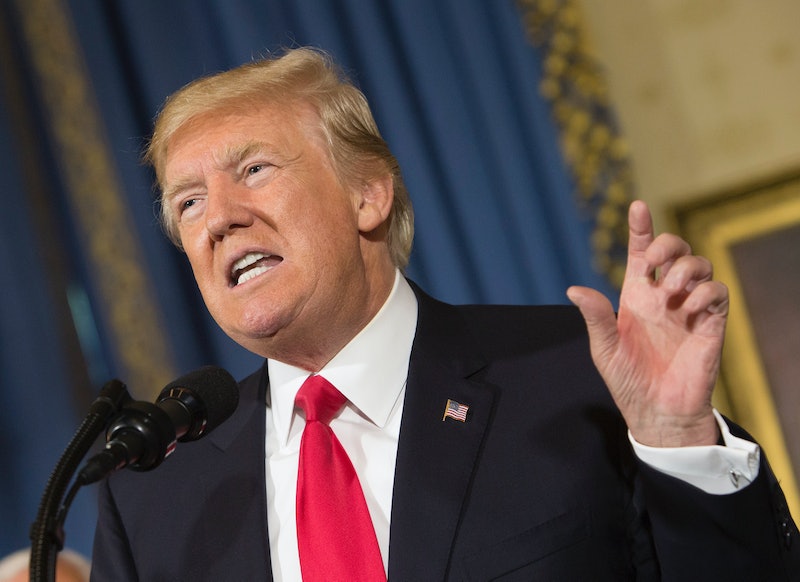 The Republican-controlled Senate just took another stab at passing a massive overhaul of the American health care system, voting on a motion to proceed after failing to marshal enough votes for its massively unpopular replacement bill. And on Tuesday afternoon, moments after the move to begin debate, President Trump responded to the Senate health care vote.

In a statement, Trump said:

I applaud the Senate for taking a giant step to end the Obamacare nightmare. As this vote shows, inaction is not an option, and now the legislative process can move forward as intended to produce a bill that lowers costs and increases options for all Americans. The Senate must now pass a bill and get it to my desk so we can finally end the Obamacare disaster once and for all.

On top of all the practical concerns contained in the Congressional Budget Office's scoring of the Senate's original replacement bill ― the tens of millions of additional uninsured, the deep cuts to Medicaid, and the transfer of wealth to the rich by way of what's effectively a massive upper-class tax cut ― it was hugely unpopular, often polling at sub-20 percent levels of public support. The apparent collapse of Republican support for the replacement bill caused some of the Senate's hard-line conservatives, like Kentucky senator Rand Paul, to push for a vote on a clean repeal, despite having no firm replacement plan in place.

And when it was all said and done, the vote on the motion to proceed ended in a 50-50 tie, enabling Vice President Mike Pence to cast the tie-breaking vote. Embedded below is President Trump's response to the Senate's motion to proceed vote ― needless to say, this is a pivotal moment in his presidency and for the American public, although an actual repeal or replacement bill has yet to be passed.

Beyond the written statement, Trump also spoke briefly about the vote at the very start of his joint press conference with Prime Minister Saad Hariri of Lebanon, praising Arizona senator John McCain for making the trip to Washington, D.C. to vote despite suffering from brain cancer.

I'm very happy to announce that, with zero of the Democrats' votes, the motion to proceed on health care has just passed, and now we move forward towards truly great health care for the American people. We look forward to that, this was a big step. I want to thank Senator John McCain, very brave man, he made a tough trip to get here and vote, so we want to thank Senator McCain and all the Republicans. We passed it without one Democratic vote, and that's a shame, but that's the way it is, and it's very unfortunate. But I want to congratulate American people, because we're going to give you very great health care, and we're going to get rid of Obamacare, which frankly should've been terminated a long time ago, it's been a disaster for the American people.

It's unclear whether the GOP will be able to muster the 50 votes to pass a full repeal of Obamacare, which is likely the only workable option at this point. The Senate parliamentarian's recent review of the Senate's replacement bill concluded that it can't be passed under the budget reconciliation process as currently written, meaning it would require 60 votes to break a filibuster, rather than the mere 50 required under reconciliation.