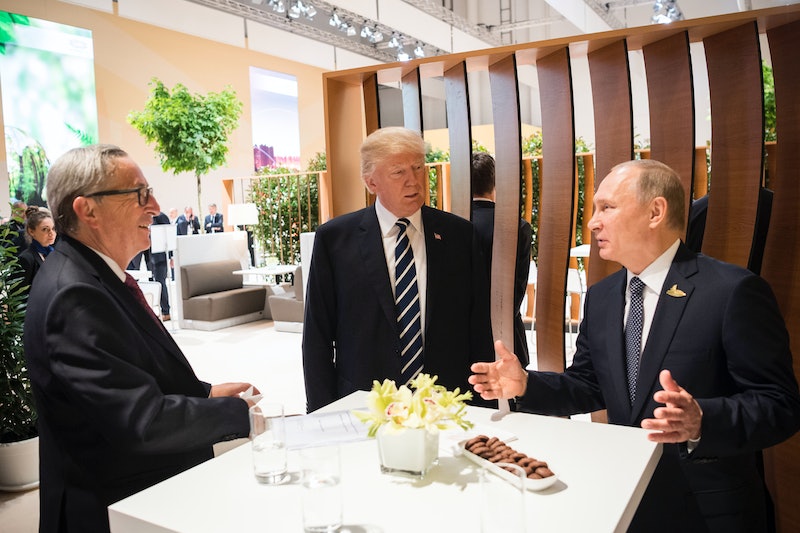 When two world leaders meet, the words that they exchange are only part of the story. There's a lot more going on in those interactions — it's just happening without any need for spoken language. Looking at the body language between Trump and Putin adds an entirely new dimension to their meeting in Helsinki, and it tells you even more about how the two men approach each other.

After the two met at the G20 summit in July 2017, for example, body language experts at the Guardian gave the advantage to Putin, who came out looking like the more powerful leader despite all of Trump's proffered handshakes and a stronger start from the American president. The BBC, on the other hand, noted that Trump looked like the all around more comfortable of the two at that meeting, and also that Trump looked like the much more eager participant.

In the Finnish capital of Helsinki, though, body language expert Lillian Glass tells Bustle that it's a meeting between equals.

"This is an equal match as far as world leaders go," Glass says, judging based off of their respective postures. "Putin is very relaxed around Trump and feels comfortable. He is slouching because he knows he is meeting a formidable counterpart, as both are equally strong leaders and men."

Another body language expert at the Express, however, disagreed with that assessment. Judi James noted that the two both entered the meeting with the swaggers of alpha males, and that Putin didn't respond with any positive signs to Trump's flattery of him regarding the recently completed World Cup tournament. She also noted Putin's "more elegant power pose" while he was listening to Trump talking, which was accompanied by a hand position that could have been communicating that Putin was impatient for Trump to finish talking.

Regarding their seated handshake, though, Glass tells Bustle that the two of them approached each other with strength that wasn't overbearing on either side. "They both lean into one another, which is a good sign," Glass says. "It's an ambivalent smile on Trump, which means he going to be tough and strong against his formidable opponent as he looks Putin square in the eye."

The Russian president, Glass says, displayed his strength not through eye contact but with the actual handshake itself.

"Putin, on the other hand, avoids direct eye contact with Trump and instead, looks down at their handshake," she says. "Putin may have squeezed Trump extra hard, as you can see by the blanching of Trump's skin near his pointer finger."

Another element of the handshake that a Twitter user mentioned was Putin's left hand, which was gripping his chair while his right hand was in Trump's grasp.

"Looks like President Putin is afraid of getting yanked by those infamous President Trump handshakes," the Twitter user commented.

"Trump has been low key about what he wants from this meeting, but Putin's body language just now showed far more casual indifference," LA Times reporter Eli Stokols wrote on Twitter. "He was basically slouching in his chair."

In a meeting where both sides offered so little information about what they would actually discuss and how they wanted the meeting to go, the leaders' body language can offer valuable clues about the ways that they approached the talks.