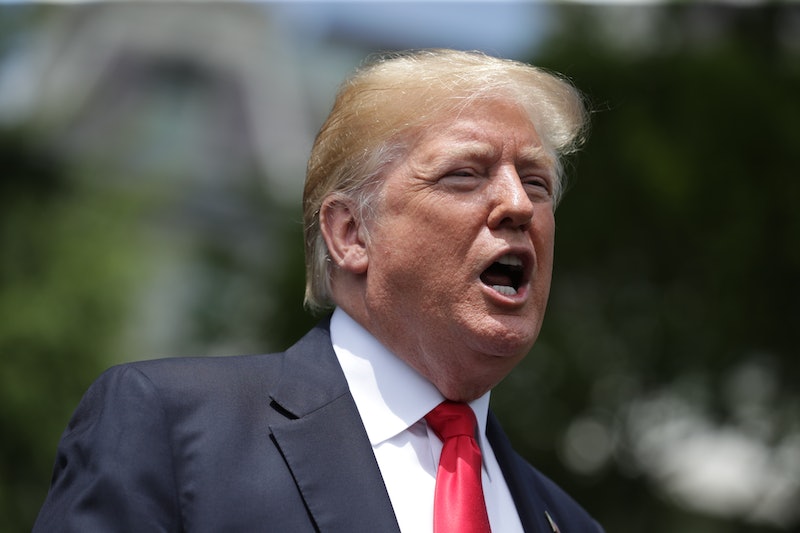 Days after his inflammatory "animals" remark about undocumented immigrants stoked outrage, President Trump has reiterated the inflammatory statement. Specifically, during a roundtable event in Long Island. Trump doubled-down on his "animals" remark, insisting again that suspected MS-13 gang members were not people, all while blurring the lines about who precisely he was dehumanizing.

If you were following the news last week, you probably heard about Trump's initial remark. During another roundtable regarding immigration, Trump insisted that some undocumented immigrants ― he may or may not have been strictly talking about suspected gang members, although his statement was typically vague and unclear ― were not people, but "animals."

This set off a round of criticism from progressives and immigration advocates, excoriating the president's words as dangerous; as Vox noted, explicitly dehumanizing minority populations is something that's been used throughout history to enable dire racial oppression, and even genocides. Many conservatives, meanwhile, argued that Trump was only referring to gang members, and that it was totally proper for the president of the United States to describe such people as "animals."

Then, on Wednesday afternoon, Trump repeated his point during the Long Island roundtable, again calling suspected MS-13 gang members "animals," but also attacking undocumented minors, demonstrating exactly the kind of goalpost-shifting that pro-immigrant activists have been warning about.

"I noticed recently, where Democrats, Nancy Pelosi for example, are trying to defend MS-13 gang members," Trump said. "I called them animals the other day, and I was met with rebuke. They said, they're people. They're not people. These are animals. And we have to be very, very tough."

But just minutes earlier in the roundtable, Trump took aim at a marginalized population quite different from suspected gang members. Specifically, undocumented minors crossing the border into the country.

This, in short, is a prime example of the reason advocates for immigrants and their rights are so harrowed by Trump's "animals" rhetoric, even when it's being applied to members of violent gangs. Because while such language might start with gang members ― or suspected gang members, which has a hugely negative affect on people who're falsely accused ― it can quickly and subtly be expanded outwards to cast suspicion and doubt on wider and wider categories of people.

It's worth remembering that within minutes of officially entering the 2016 presidential race, Trump employed this exact kind of generalized line-blurring about Mexican immigrants. During his presidential announcement speech, he railed that Mexico was sending rapists and criminals across the border.

According to the American Civil Liberties Union (ACLU), the Trump administration has already been rounding up and attempting to deport undocumented minors on suspicion of gang membership, in some cases wrongly.

Just last week, a federal judge both ruled against Immigration and Customs Enforcement (ICE), and accused the agency of lying about a detained DACA recipient being gang-affiliated in an effort to deport him from the country. As Slate detailed, his ruling further ordered to government to refrain from "asserting, adopting, or relying in any proceedings on any statement or record … purporting to allege or establish that Mr. Ramirez is a gang member, gang affiliated, or a threat to public safety."