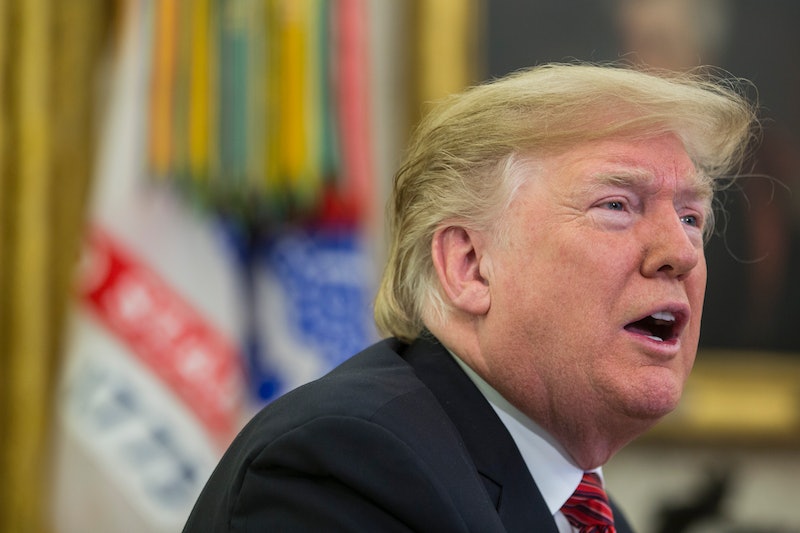 In a series of tweets posted Saturday, President Donald Trump ramped up his border wall rhetoric and moved to skirt responsibility for the recent deaths of two Guatemalan migrant children, who died while in U.S. Customs and Border Protection (CBP) custody. Trump responded to migrant children's deaths in federal custody by blaming Democrats.

"Any deaths of children or others at the Border are strictly the fault of the Democrats and their pathetic immigration policies that allow people to make the long trek thinking they can enter our country illegally," the president tweeted. "They can't. If we had a Wall, they wouldn't even try!"

The president then appeared to suggest that his proposed border wall would bring an end to deaths at the border. "Border Patrol needs the Wall and it will all end," he tweeted. "They are working so hard & getting so little credit!"

An 8-year-old migrant boy, identified as Felipe Gómez Alonzo, died in CBP custody shortly after midnight on Christmas Day, the agency confirmed in a news release sent to Bustle. While an official cause of death has not yet been determined, CNN has reported that an autopsy conducted by the New Mexico Office of the Medical Investigator found Alonzo had Influenza B, also known as the flu.

Alonzo's death came less than three weeks after 7-year-old Jakelin Amei Rosmery Caal Maquin, a migrant child also originally from Guatemala, died less than 48 hours after she'd been placed in border patrol custody. According to CBP, Jakelin, her father, and 161 other migrants had presented themselves to border patrol agents at the Antelope Wells Port of Entry in a remote part of New Mexico's Chihuahuan Desert on Dec. 6.

On Saturday, President Trump claimed the two migrant children had been "very sick" before they were placed in CBP's custody. "The two children in question were very sick before they were given over to Border Patrol," Trump tweeted.

Although it's unclear if Alonzo was "very sick" before CBP took him into custody as Trump tweeted, CBP did tell Bustle earlier this week that a border patrol officer noticed "signs of potential illness" in the boy on Monday and "promptly" transferred both him and his father to Gerald Champion Regional Medical Center in Alamogordo, New Mexico, for treatment.

While Trump has blamed the children's deaths on Democrats, Chairman Elect of the Congressional Hispanic Caucus (and Democrat) Joaquin Castro placed the blame squarely with the Trump administration earlier this week. "The Administration’s policy of turning people away from legal ports of entry, otherwise known as metering, is putting families and children in great danger," he said in a statement released Dec. 25.

Castro said "serious concerns were raised about the condition of CBP detention facilities and the lack of adequate medical supplies, equipment and resources to properly treat migrants" after a Congressional oversight trip to the border patrol station where Jakelin was transferred to. "Many questions remain unanswered, including how many children have died in CBP custody," Castro said. "With two deaths that we know about just in the last few weeks, Congress will continue to press the Department of Homeland Security until we get answers to all our questions."