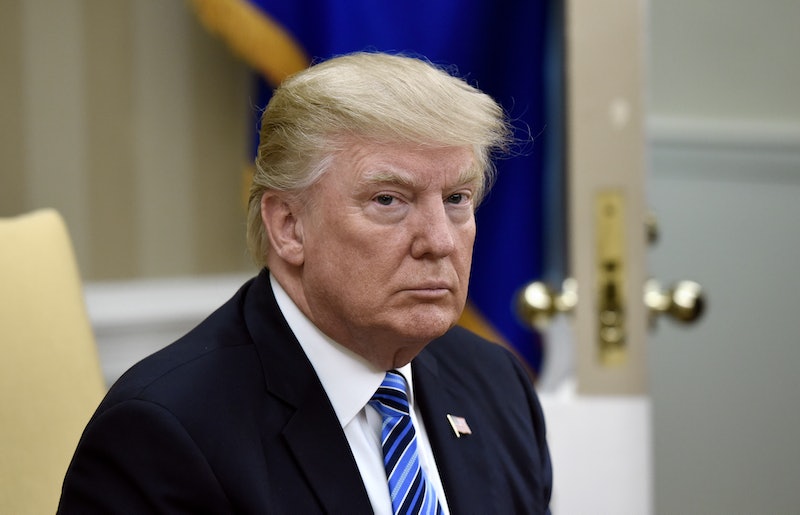 Five people were killed and several others were injured when a gunman opened fire at the offices of the Capital Gazette, a newspaper in Annapolis, Maryland, on Thursday. Shortly after local officials held a press conference confirming the incident, President Trump responded to the Capital Gazette shooting in a tweet that afternoon, offering his "thoughts and prayers."

"Prior to departing Wisconsin, I was briefed on the shooting at Capital Gazette in Annapolis, Maryland," Trump tweeted. "My thoughts and prayers are with the victims and their families. Thank you to all of the First Responders who are currently on the scene."

Five people were killed with several other "gravely injured" in a workplace shooting in Annapolis, Acting Police Chief of Anne Arundel County Bill Krampf confirmed in a press conference Thursday. Although law enforcement officials would not confirm if the shooting had occurred inside the Capital Gazette newsroom — as was being reported by the paper's staff on social media — Anne Arundel Police said they'd responded to an active shooter at 888 Bestgate Road, a building which houses the Capital Gazette offices.

A person believed to be the shooter was in custody and being interrogated, Anne Arundel County Executive Steve Schuh later told reporters at a press conference Thursday.

And in November, the president gave his "thoughts and prayers" to the 26 people killed and the 20 others injured in a shooting at the First Baptist Church in Sutherland Springs, Texas. "Our thoughts and prayers are with the victims and families of today’s murderous attack," Trump said during a press conference in Japan.

Yet many gun-control advocates have come to view the president's often repeated "thoughts and prayers" as a pitiful replacement for what they view as much needed action. In fact, over the course of the last year, the phrase "thoughts and prayers" has become something of a politically-loaded phrase often inspiring cynicism and outrage.

"It is positively infuriating that my colleagues in Congress are so afraid of the gun industry that they pretend there aren't public policy responses to this epidemic," Sen. Chris Murphy said in a statement released after more than 50 people were killed in a shooting in the Las Vegas, Nevada, last October. "There are, and the thoughts and prayers of politicians are cruelly hollow if they are paired with continued legislative indifference."

Some journalists found the "thoughts and prayers" President Trump offered Thursday for those involved in the Capital Gazette shooting to contradictory given his standard position on the news media. Trump often condemns numerous outlets and members of the media as "fake news" and has previously characterized them as "the enemy of the American people."

"Someone please tell @realDonaldTrump where to stick his 'thoughts and prayers' because we all know he believes the media is 'the enemy,' writer David Leavitt tweeted.

"Trump said the news media are 'enemies of the American people'," The Herald reporter David Leask tweeted. "He said: 'It is frankly disgusting the press is able to write whatever it wants to write. People should look in to it.' He called journalists 'dishonest people'. Keep your thoughts and prayers to yourself, Donald."