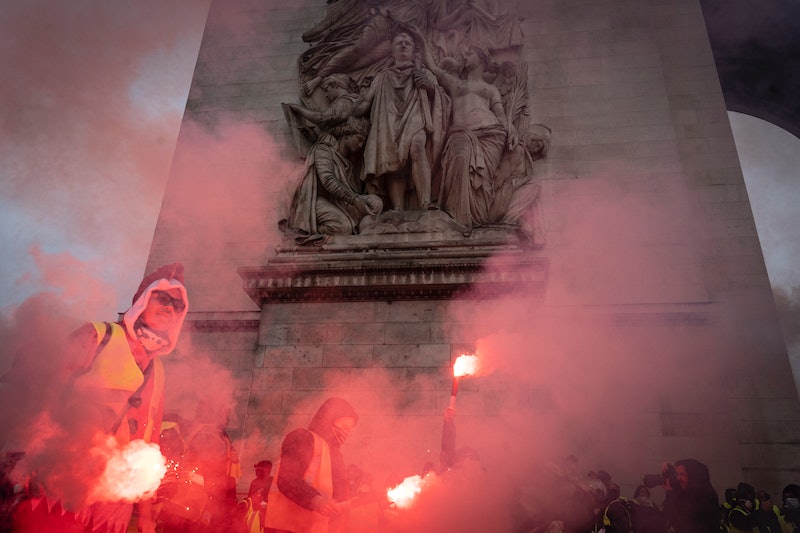 Over the weekend, the world watched as the third week of protests in France's capital grew to be the most violent week thus far — and naturally, the president had more than a few things to tweet about it. On Tuesday evening, Trump responded to the Paris protests by falsely implying French President Emmanuel Macron was pulling France out of the Paris Agreement. Trump pointed out how "fatally flawed" the climate change agreement was, then went on to argue that Americans "shouldn't have to pay for other countries' pollution."

Trump wrote in a pair of tweets,

I am glad that my friend @EmmanuelMacron and the protestors in Paris have agreed with the conclusion I reached two years ago. The Paris Agreement is fatally flawed because it raises the price of energy for responsible countries while whitewashing some of the worst polluters in the world.

I want clean air and clean water and have been making great strides in improving America’s environment. But American taxpayers – and American workers – shouldn’t pay to clean up others countries’ pollution.

To be clear, Macron has made no indication that he plans to withdraw from the Paris Agreement, or that he thinks it's "fatally flawed."

Rather, Macron has announced a six-month pause in the planned tax increase on fossil fuels, in the wake of the "yellow vests movement" that has served as the foundation for the French protests. Specifically, the tax increase was going to amount to an additional 30 cents per gallon of fuel, in an effort to decrease fuel consumption. But protesters were infuriated over the increase, since the cost of fuel is already at approximately $6 per gallon of diesel fuel.

Though Macron may have put a pause on one of his environmental policies, that by no means equates to him deciding to pull France from the Paris Agreement. Macron has been one of the most enthusiastic supporters of the Agreement from the beginning, and strongly denounced Trump's decision to pull the United States from the climate change compact in 2017.

Macron called the decision a "mistake," and suggested that the United States would eventually return to the agreement. He even managed to insert a subtle dig into his statement, asking all countries to work towards making "our planet great again."

This recent mischaracterization by Trump is not the first time he's spread a false claim about the Paris riots. Earlier on Tuesday, Trump retweeted a post by conservative activist Charlie Kirk that claimed protesters in Paris were chanting "We want Trump."

Kirk wrote, "There are riots in socialist France because of radical leftist fuel taxes Media barely mentioning thisAmerica is booming, Europe is burning They want to cover up the middle class rebellion against cultural Marxism 'We want Trump' being chanted through the streets of Paris"

Conservative radio show host Rush Limbaugh made a similar claim the day before. He said, "You know what's been overheard in some of the cheering over there? I kid you not. I know friends who are there. There are some people wearing the yellow vests chanting, 'We want Trump' among the rioters in Paris."

CNN confirms that there is no proof, video or otherwise, that that happened in Paris. What's more, CNN confirms that a video that has been circulating on social media as alleged proof of those chants was actually taken in Trafalgar Square in London.