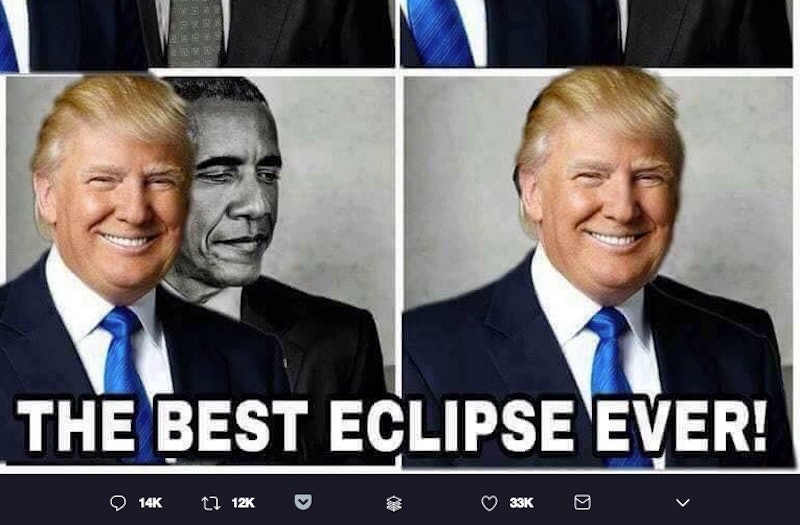 One of the stranger stories to come out of Monday's solar eclipse was the news that Donald Trump stared directly at the sun, despite having his eclipse glasses handy. But even that wasn't as strange as the meme he retweeted on Friday. Trump retweeted a meme about the eclipse that it implied that he was the moon, briefly casting a shadow on the shining legacy of Barack Obama. Yes, really.

The meme, which Trump retweeted from a self-described YouTube actor named Jerry Travone, showed an in-color image of Trump gradually approaching and standing in front of a black-and-white shadow of Obama. The meme is captioned, "the best eclipse ever!"

Travone intended the meme as a compliment, and that is clearly how Trump received it, but he evidently ignored — or was not made aware of — the implication that he is but a "dark, short-lived blot" on Obama's legacy, as Slate's Ben Matthis-Lilley put it. If Trump is the moon, then he can really only block out the sun — which in this case is represented by Obama — for a few minutes before fading away.

"I got tired of hearing people say how our president hasn't accomplished anything and I knew that wasn't true at all," Travone told NBC News in a Twitter message, "so I wanted to express what myself and millions of Americans already knew and that was our president is a once in a lifetime leader and I told many people during the election that I would crawl over broken glass to cast my vote for Donald J Trump."

Twitter users were bemused — did Trump really retweet a meme that doesn't portray him in the best light? Although it's true that Travone created the meme to praise Trump, the meme — and apparently, the president — don't really understand how eclipses work.

Who knows? Maybe this is an extremely subtle confession from Trump. So subtle, in fact, that he doesn't even realize it.

"A new poll suggests that the majority of Americans might think so," Berman added in the clip above.

It seems that if you make the decision to pit the moon and the sun against each other, the sun comes out on top almost every time; at least, that's how many social media users seem to feel. Of course, one Twitter user also managed to make a new meme:

Trump has not yet responded to Twitter users who have mocked his decision to retweet this particular meme.

More like this
YouTuber Runs Into Margaret Sanger’s Grandson While Filming
By Alexis Morillo
American Girl Doll Memes Are Going Viral On Instagram & Tiktok
By Emma Carey
EJ Marcus Runs The Most Wholesome Corner Of TikTok
By Alexis Morillo
What Is A “Softboy?” The TikTok Term & Aesthetic, Explained
By Courtney Young
Get Even More From Bustle — Sign Up For The Newsletter