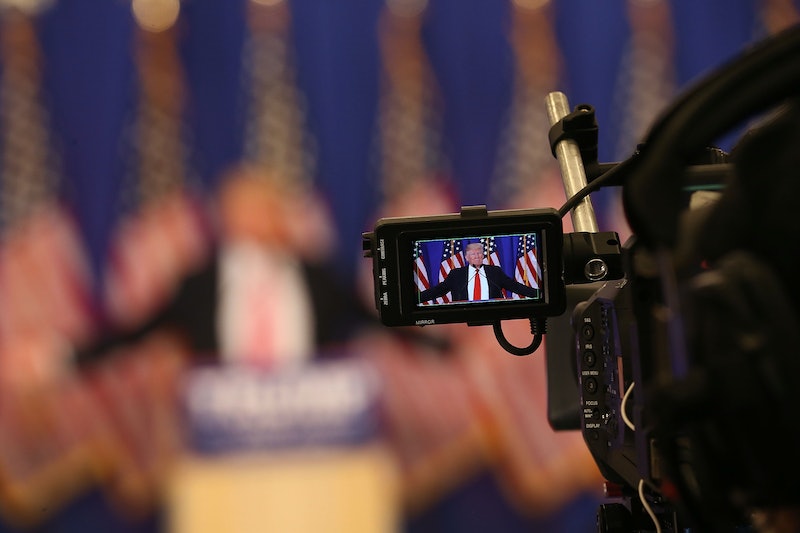 In a break from tradition, President Trump isn't attending the White House Correspondents' Dinner this year. He made the announcement on Saturday, and on Monday, offered his official excuse for skipping the event. Trump says that it's because — hold on to your hats, folks — the press doesn't treat him fairly. Shock!

Over the years, you make a mistake, I fully understand when they hit you. But when they make stories up, when they create sources – 'cause I believe that sometimes they don't have sources, you know, the sources don't exist. Sometimes they do exist, I'm not saying all sources, but I do believe that a lot of the sources are made up. A lot of the stories are made up. I believe a lot of, the stories are pure fiction, they just pull it out of air.

That's why Trump says he's not going, at least. I can think of a few other possibilities as well.

Prior to Trump's announcement, some had insisted that the White House Correspondents' Association, which hosts the dinner, shouldn't invite Trump to the event at all. This would be understandable: The WHCA is comprised largely of executives from several top news organizations, and given Trump's recent attacks on the press, as well as his decision to exclude several news outlets from the White House press gaggle, one could make the case that he doesn't deserve an invitation to a press-centric event like this. Indeed, even the WHCA itself condemned Trump for restricting the press gaggle.

When the WHCA responded to Trump's announcement, it was notably silent on the issue. The WHCA didn't respond to Bustle's request for comment, but it's at least conceivable — though again, not confirmed — that Trump canceled his appearance out of fear that he wouldn't be invited in the first place. However, it's worth noting that although this theory is fun to entertain, it's highly unlikely seeing as it's tradition for a president to attend the dinner.

So, that's one theory. Here's another: Trump doesn't like being made fun of. When a president attends the White House Correspondent's Dinner, they're generally expected to do two things: Sit and laugh while the host gives a speech making fun of them, and then give a self-deprecating speech that pokes fun at themselves. Needless to say, self-deprecation is not Trump's strong suit, and absolutely nothing he's ever done in public indicates that he enjoys being made fun of.

There's probably some truth to Trump's assertion that he's skipping the dinner due to his objections with the press — I just suspect that's not all there is to the story.