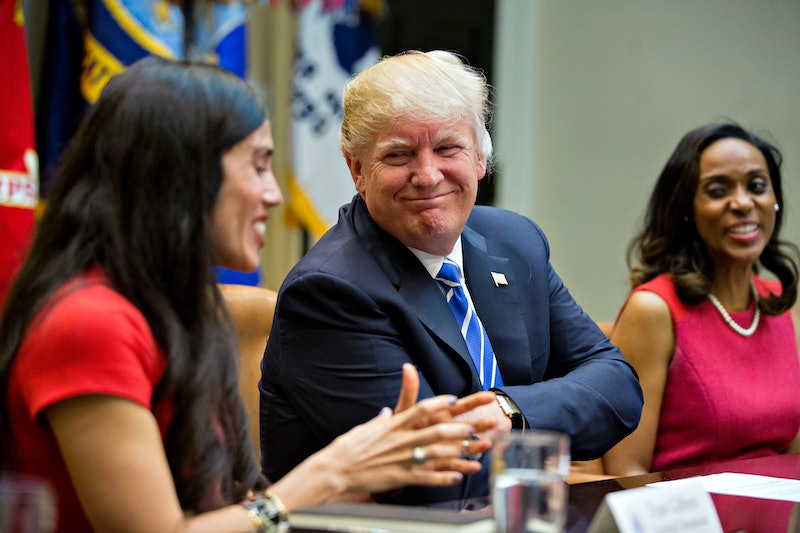 We have a new president in the White House and he has made his mark on all sorts of policies. For progressives, nearly every single executive order has made you cringe. Be it about abortion rights, oil pipelines, or trans students, none of them come as a surprise: President Donald Trump is sticking to his guns on almost everything. But this past week his abysmal policy decisions reached a new low, at least when you take the timing into consideration. Trump took away women's worker protections right before Equal Pay Day. More specifically, on March 27, Trump signed a bill rolling back the Obama-era Fair Pay and Safe Workplaces rule.

Tuesday, of course, marks the day in the year when women's wages finally catch up to men's wages from the year before. In other words, as a woman, you would have had to work all of 2016 and these months of 2017 leading up to April 4 to make the same amount that a man did in 2016. President Obama and his administration had worked to combat this. For instance, he signed the The Lilly Ledbetter Fair Pay Act of 2009 to make it easier for women to rectify discriminatory wages after the fact. He also organized a group of 57 companies that pledged to implement equal pay voluntarily.

Basically the Obama administration realized that many of the contractors that were winning big federal projects worth millions were some of the worst abusers when it came to wage discrimination and other problems (like workplace safety). NBC News reported that the Government Accountability Office even published a report detailing the abuses.

So Obama then decided to require that these contractors have paycheck transparency, or a paycheck that explains clearly all hours worked, overtime, and other deductions. Having that is a no-brainer, you would think. The other rule was a ban on forced arbitration in the case of sexual harassment or assault. The decision to go to arbitration could only happen if "made with the voluntary consent of employees or independent contractors."

Now those are both gone, and it could silence victims, according to Sen. Richard Blumenthal. He told NBC News that the effects of Trump's order could be chilling:

These coverup clauses render people voiceless — forcing them to suffer in silence, suppressing justice, and allowing others to fall victim in the future. At a time when the fight for equal pay continues, Trump also moved to eliminate paycheck transparency and leave workers to negotiate in the dark.

None of this meshes with what Trump's daughter, Ivanka, said on the campaign trail. She claimed her father would support equal pay, but that is not the case. Some of the most recent numbers show that women make just 80 percent of what men do. And in 2017, the president ought to be fighting to end such a discrepancy, not signing executive orders to move backwards.

So give the White House a call, and let them know Trump has been a disappointment this Equal Pay Day.