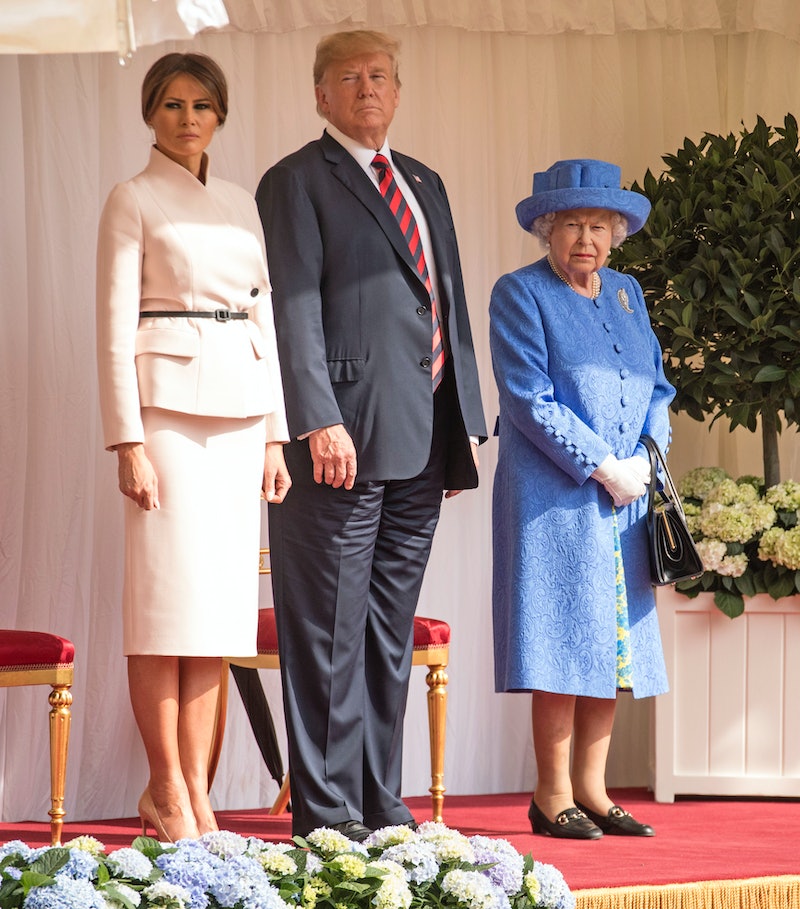 Social media erupted last month when Queen Elizabeth II was seen checking her watch while waiting for President Donald Trump on the lawn of Windsor Castle. She continued to stand around for several more minutes until a cavalcade of Secret Service vehicles arrived with the president and first lady. But a different story was told on Thursday: Speaking at a rally, Trump claimed the queen kept him waiting.

"I was about 15 minutes early," Trump told the audience in Pennsylvania, "and I'm waiting with my wife, and that's fine. Hey, it's the queen, right? We can wait."

He called reports indicating that he'd been the tardy one "fake, fake, disgusting news." But footage broadcast live from the event suggests otherwise. According to Politico, it shows the queen standing in wait for 12 minutes before Trump arrives.

Pundits covering the meeting between the world leaders commented on the strange sight. "The queen is waiting, which you don't often see," CNN's Max Foster said, per CNN's Brian Stelter. Patricia Treble, a writer who covers the royal family, was one of the many who noted the queen checking her watch: "Oh dear, she just looked at her watch," she wrote. "The Queen does NOT like tardiness."

Here's how Trump's version of the story goes: "I had landed and I'm on the ground and I'm waiting with the king's and with the queen's guards," he told the rally crowd. He said that he'd arrived 15 minutes early. "See all these Secret Service guys?" he asked the audience. "They're not late. They don't believe in being late. They believe in being early, not late. One of them said to me, 'Sir, we weren't late.'"

"So, here was the story by the fake news," he continued. "'The president was 15 minutes late for the queen.'" The crowd booed.

Trump also noted that his meeting with the monarch "was supposed to last for 15 minutes but it lasted for like an hour, because we got along." He said that he and the queen had a good rapport: "You know, like, sometimes, if you like somebody, you get along, good chemistry?" But then, according to him, the media misrepresented their interaction by declaring that he'd "overstayed."

It's true that it's considered rude to be tardy when meeting the queen. "It is a golden rule of Royal protocol that you should never keep the Queen waiting," The Telegraph wrote in 2015. Still, it does happen. Canadian Prime Minister Justin Trudeau was late to a reception with her that year when he got stuck in traffic. Russian President Vladimir Putin was 15 minutes late to see her in 2003, and that incident made headlines, according to The Independent.

Brits lashed out on social media after Trump claimed that she'd been the one late to the meeting. "Mate, we WATCHED HER STANDING STARING AT HER WATCH," wrote one user.

Another argued that the offense was especially rude given the queen's age and the summer weather: "Does he know the event was televised live and he left a 92 year old woman standing in the heat?"