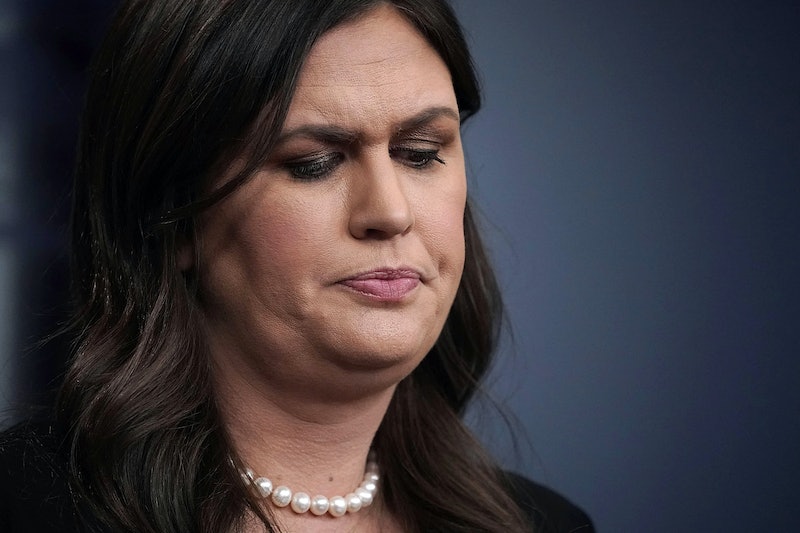 It looks like energies are changing in the White House — and they're taking a turn down south. Apparently, Donald Trump's relationship with Sarah Huckabee Sanders, his press secretary, is deteriorating.

The New York Times reported Monday that President Trump said he will "grade" Sarah Huckabee Sanders' performance during her press briefings, and that he'll be rating her capabilities. White House insiders tell The Times that the president did not use the bit about "grading" seriously.

Furthermore, Trump has been privately seeking the opinions of others on Sanders, according to The Times. For the press secretary, this kind of opinion-crowdsourcing within the White House could possibly mean that Trump is concerned she may affect his rating in the press, sources told the newspaper.

Another supposed reason for Trump reportedly giving Sanders the cold shoulder goes back to the White House Correspondents Dinner. In April, during the event, comedian Michelle Wolf publicly castigated Sanders and called her a liar as she sat and expressed little to no expression to Wolf's humorous jabs.

The fact that she remained seated — and didn't storm out of the event — has reportedly elicited the president's disapproval. The Times reported that Trump said Sanders should have left the White House Correspondents Dinner to, presumably, display her rejection of Wolf's material.

This reported hiccup in their otherwise previously amicable dynamics comes a few days after a Virginia restaurant refused to serve Sanders. On Sunday, the management Red Hen of Lexington, Virginia, kicked Sanders out of its establishment over political beliefs. For those curious about the legality of such a move: Yes, Red Hen was within its legal rights to remove Sanders from its premises.

According to The Times, the lack of readiness to defend Sanders became obvious when it took Trump 48 hours to tweet about the incident. When he did eventually take to his social media podium, Trump's tweet focused more on insulting Red Hen and less on Sanders, who he briefly said was a "fine person."

"The Red Hen Restaurant should focus more on cleaning its filthy canopies, doors and windows (badly needs a paint job) rather than refusing to serve a fine person like Sarah Huckabee Sanders," Trump tweeted two days later. "I always had a rule, if a restaurant is dirty on the outside, it is dirty on the inside!"

Sanders herself responded to the Red Hen incident on Twitter on Saturday. "Last night I was told by the owner of Red Hen in Lexington, VA to leave because I work for @POTUS and I politely left," she tweeted. "Her actions say far more about her than about me. I always do my best to treat people, including those I disagree with, respectfully and will continue to do so."

In comments to the Washington Post, Red Hen owner Stephanie Wilkinson said that she forced Sanders out of her restaurant because of her complicity in working for an "inhumane and unethical" administration. She also added, "The restaurant has certain standards that [she felt it had] to uphold, such as honesty, and compassion, and cooperation."

Given how tumultuous and unpredictable Trump's White House is, it is difficult to confidently say that Sanders is about to leave her position amid such a report. The press secretary has shown reluctance to give a firm yes or no. If she leaves the role, it's not clear whether White House Principal Deputy Press Secretary Raj Shah will fill in for her.

What does seem to be clear is that Trump has his own ideas on how Sanders should carry herself in front of the American public and media. And those ideas could eventually take a toll on the press secretary.