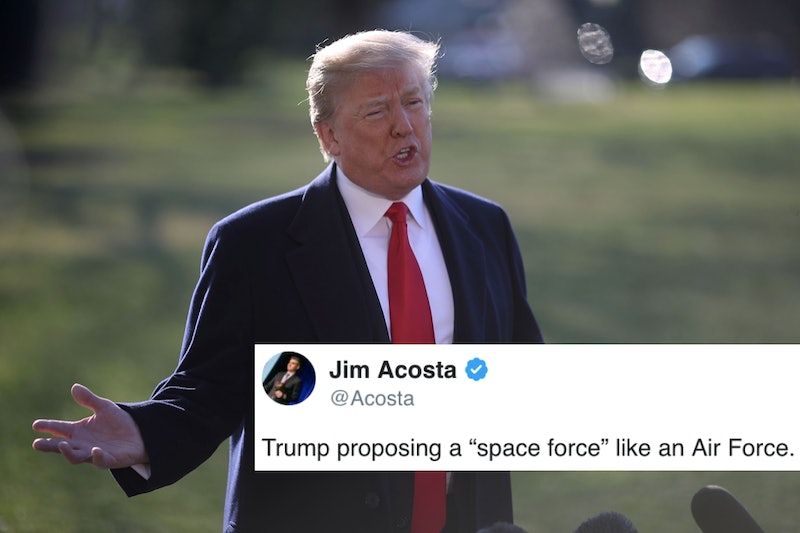 On Tuesday afternoon, while speaking to service members at the Marine Corps Air Station Miramar in San Diego, President Donald Trump suggested establishing a branch of the military that would operate outside the confine's of the earth's atmosphere. In his reportedly off-script musings, Trump described a so-called "Space Force," but Twitter users weren't immediately convinced by the idea, to say the least.

Trump told attendees at the event that he initially came up with the idea as a joke, but the more he thought of it, he said, the more it seemed like a good idea. "I said, 'maybe we need a new force, we'll call it the Space Force,' and I was not really serious. Then I said, 'what a great idea,' maybe we'll have to do that," Trump explained.

Based on how Twitter reacted, however, the proposal wasn't received well. "This is my friend, he died fighting with the space force, please retweet to show respect to the troops and honor his memory," tweeted one user, accompanied by a photo of Han Solo.

Another, humor columnist Rex Huppke, penned a letter apologizing to the rest of the world on behalf of Trump's proposal:

Dear World: We would like to apologize for our extremely dumb American president. Yes, he did say “space force.” No, he doesn’t know what he’s talking about. Please know that we are working to address this problem.Your patience is appreciated.- Most of America

Some reactions were serious in their criticism, but as Twitter is wont to do, it poked holes in the idea by making a multitude of wide-ranging jokes.

Others, such as Massachusetts candidate for the House of Representatives Brianna Wu, took a more sober approach. In a series of tweets, she discussed how the idea of a Space Force could potentially be breaking an international treaty which forbade the militarization of space, which the United States did not sign on to.

"With Trump deciding to break this treaty on the militarization of space, this means other nations could be forced to develop space-based weapons for nuclear deterrent," Wu tweeted. "This could start a new era of nuclear proliferation - literally the last thing we need right now."

Trump, for his part, couched his proposal in terms of spending. According to him, the United States had already devoted so much money to space exploration, and many astronauts have already been service members, so expanding the military outward only makes sense.

"So think of that — Space Force." he said. "Because we are spending a lot and we have a lot of private money coming in, tremendous. You saw what happened the other day, and tremendous success. From the very beginning, many of our astronauts have been soldiers and air men, coast guard men and marines. And our service members will be vital to ensuring America continues to lead the way into the stars."

"Tfw you hear the president pitching his exciting new idea about an outer space "Force," tweeted culture reporter Dave Itzkoff. The Tweet was accompanied by a photo of a dejected-appearing George Lucas, the creator of Star Wars.