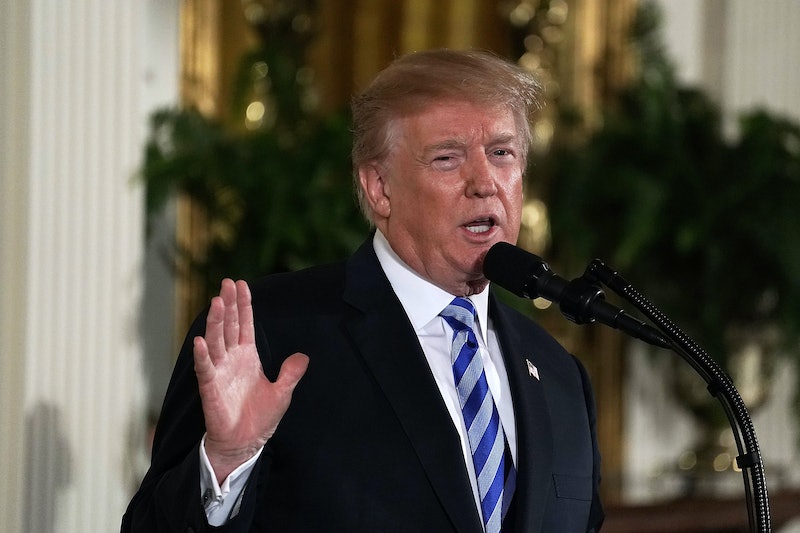 As the gun control debate once again takes hold of the nation, another suggestion was thrown into the tense conversation Thursday — this time, by the president of the United States. On Thursday, Donald Trump suggested giving bonuses to gun-trained teachers.

The president suggested this approach as a means to combat gun violence in the country. The most recent incident with a high number of casualties took place in Parkland, Florida, on Valentine's Day. At least 17 people were killed.

While speaking with reporters, Trump said he wasn't opposed to the idea of concealed carry for teachers. "We have to harden those schools, not soften them. A gun-free zone, to a killer, or somebody that wants to be a killer, that's like going in for the ice cream. That's like saying, 'Here I am, take me,'" Trump said. The president added,

These people are cowards. They're not going to walk into a school if 20 percent of the teachers have guns - it may be 10 percent or may be 40 percent. And what I'd recommend doing is the people that do carry, we give them a bonus. We give them a little bit of a bonus.

Trump did not specify where the teachers would take training, or if there would be an allocation of funds out of the federal or state-level budgets to facilitate such exercises.

The president added, "They'll frankly feel more comfortable having the gun anyway. But you give them a little bit of a bonus."

Raj Shah, principal deputy press secretary for the White House, informed press that the president's idea is still just that — an idea up in the air. At this moment, it hasn't been taken to the level of legislation. "I think that if we find the policy solutions that make the most sense that we can get buy in for, we'll figure out the rest of the pieces that you outlined," Shah said.

Trump's comments arrive only one day after the White House held a listening session with the survivors of the Parkland shooting as well as those who survived or lost loved ones in the Sandy Hook shooting and Las Vegas attack. At the meeting, Trump called for stronger background checks for those seeking to buy firearms.

Meanwhile, Vice President Mike Pence said, "I encourage you to be candid and be vulnerable, and share with us not only your personal experience, but what it is you would have us to do."

Yet, at the meeting, no parent or sibling related to any of the 17 victims who lost their lives in the shooting mentioned the idea of arming teachers on school premises. Much of the sentiment shared that day called for more sensible gun laws and less weaponization of school grounds. Young participants of the meeting, like 16-year-old Alphonso Calderon, told Trump and Pence as well as Education Secretary Betsy DeVos,

At least in Florida, there appears to be significant opposition to the idea of concealed-carry practicing teachers. Broward County Superintendent Robert Runcie said on Wednesday that the state does not need armed teachers.

"Some of the dialogue I’ve heard recently is about arming teachers. We don’t need to put guns in the hands of teachers," Runcie said. He also said the approach has to be different, adding, "You know what we need? We need to arm our teachers with more money in their pocket."