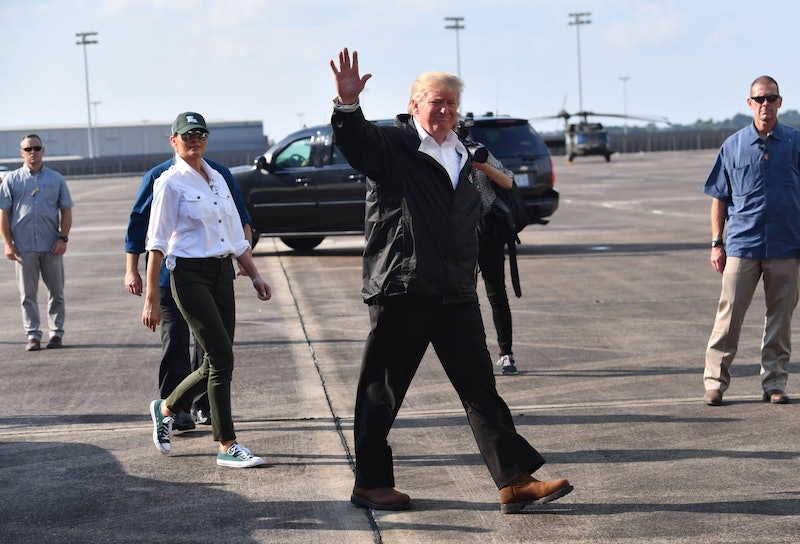 Donald Trump traveled back to Texas Saturday for the second time since Hurricane Harvey caused widespread damage and destruction throughout the state's coastal region. While visiting NRG Stadium, one of the makeshift shelters for displaced Houstonians, Trump said Harvey victims are "very happy" about the relief efforts.

"The message is that things are working out well. Really, I think people appreciate what’s been done. It’s been done very efficiently, very well, and that’s what we want,” Trump said during a press gaggle, according to The Washington Post. “We’re very happy with the way everything is going. A lot of love. There’s a lot of love.”

A reporter also asked Trump what people had been saying to him at the shelter. "They're really happy with what's going on," Trump said. "It's been something... It's been really well received."

As you may have noticed, Trump's comments are seriously lacking in context. This statement was offered without any concrete information about what exactly Trump is referencing, how money is being allocated, and what specific projects are underway. He's doesn't offer any real perspective or empathy for the suffering that people are going through, only highlighting the positives.

Some could argue that he's trying to lift people's spirits by providing some hope in the midst of a crisis, which certainly may be true for some supporters who still have faith in Trump's sincerity. However, in light of Trump's habit of inflating details, he also gives off the unfortunate impression that he's just trying to make himself look better.

Trump also gave a statement to the crowd about the timeframe for the recovery process, which may be even more concerning. “We’re talking about, they say two years, three years, but I think that because this is Texas you’ll probably do it in six months!” Trump while people in the audience cheered, The Post reported.

Again, Trump's remarks fit his overall demonstrated attitude toward governance thus far in his presidency — be vague and tell people what they want to hear. He's promising desperate people that everything is fine without backing up his claims whatsoever, and the Texans who have lost everything in this disaster deserve better than that. They deserve real information, real compassion, and real empathy, from a president who really cares.

This certainly isn't the most objectionable thing that Trump has ever said, but the comment still deserves attention because it highlights Trump's crisis response skills, which so far haven't proven impressive to the American people. In conjunction with the hands-off approach from his first trip to visit Harvey victims, it seems clear that Trump isn't much stronger of a leader during a national emergency than he is during a regular week at the White House.