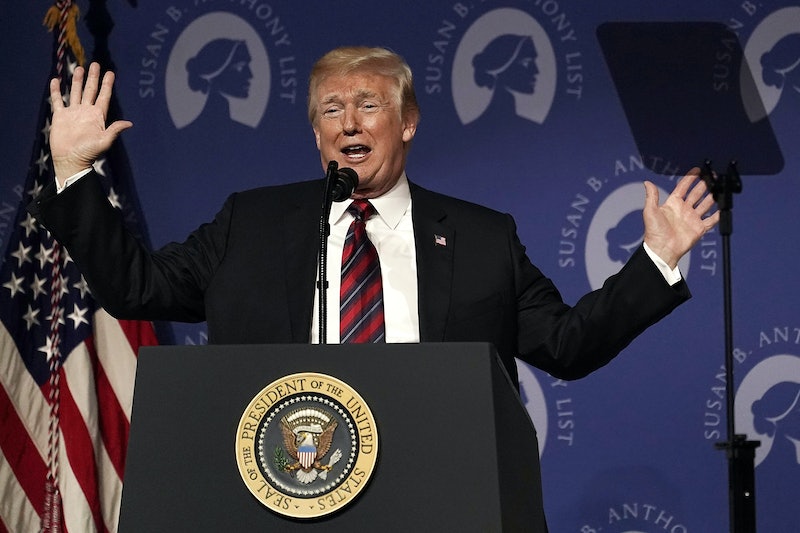 While in the United Kingdom, President Donald Trump participated in a 30-minute interview with British journalist Piers Morgan. The pair broached a long list of subjects during their half-hour discussion on Air Force One, including abortion and its tenuous legal status. According to Morgan, Trump said he "understands" concern about Roe v Wade potentially being repealed. However, Trump apparently isn't so sure that would ever happen, even though he recently nominated his second conservative justice to the Supreme Court.

Initially, Trump appeared to balk when Morgan asked him to share his views on abortion legality.

"Well, look, I’m a conservative as you know," Trump said, according to Morgan's account in the Daily Mail. "I have my views, but I’ve been told it’s truly best not to talk about it. That’s a little bit of an interesting stance but that’s the right thing to do, now."

But, when Morgan asked the President if he could understand why many women in the United States are concerned that legal abortion access could be revoked in the near future, Trump said he understood where the concern stemmed from.

"I do understand, but I also understand that you know, that’s a 50/50 question in this country," he said. "I think [Kavanaugh] is going to be confirmed and someday in the distant future there could be a vote."

But, according to Trump, he wasn't entirely certain that any case challenging abortion access would ever make its way up to the Supreme Court.

"There’s also a very good chance there won’t be a vote," he said. "We’ll have to see what happens. A case has to get up there. It could be a long time before a case ever gets up there."

Many news outlets were quick to fact-check Trump's claim that abortion access is a so-called "50/50" issue in the United States. As Newsweek pointed out, Trump's claim that Americans are split down the middle regarding Roe came just days after a Gallup poll indicated that the majority of U.S. residents would prefer that Roe continue to stand as is.

Much of the current discussion around Roe stems from Trump's new nominee to the Supreme Court, who is slated to replace outgoing Justice Anthony Kennedy. If and when he is ultimately confirmed, nominee Brett Kavanaugh will cement the Supreme Court's ideological bent firmly to the right. While he hasn't explicitly shared his opinion about Roe v. Wade, which is typical of judges, Kavanaugh is a known conservative, and has an abortion-access record less than promising for those concerned with protecting access to the procedure.

While it is true that there is no guarantee that a Roe-related case would make its way up to the Supreme Court's docket, it's a well-documented fact that attempts are being made to get one there. One way this is done is by passing local or state laws that inhibit access to abortion, often by imposing some sort of time limit that makes having the procedure illegal after a certain gestation period.

These types of limitations often trigger legal action by groups concerned with protecting abortion access, and those are exactly the type of legal battles that could end up making it all the way up to the Supreme Court. Depending on how the Court rules, Roe v. Wade could potentially be limited, or else entirely overturned. Many progressive groups consider this a distinct possibility given the projected ideological makeup of the Court.