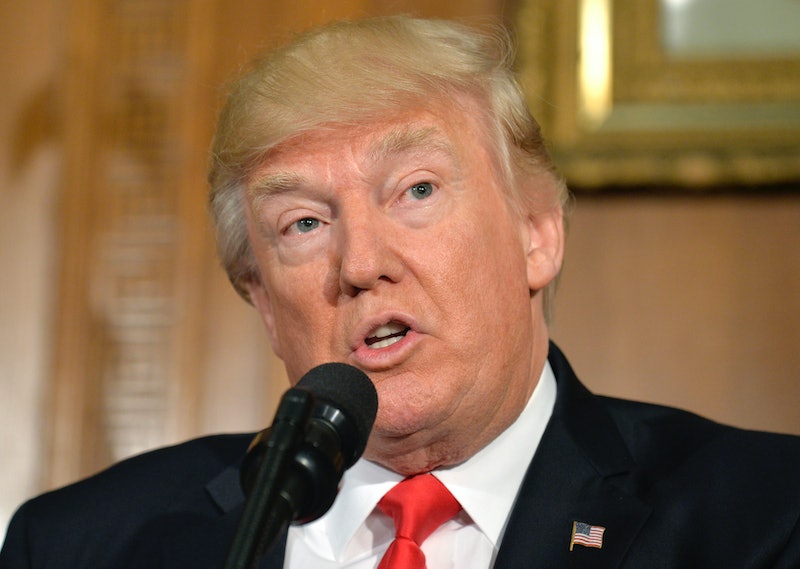 President Donald Trump wants a wall. But is he the only U.S. president to support the idea of building a wall along the country's southern border? Although he provided no evidence or details, President Trump has claimed past presidents have privately told him they knew they should have built the wall. But Trump's claim that past presidents privately support his wall is being easily refuted.

"This should have been done by all of the presidents that preceded me," Trump said Friday in reference to his plan to build a complete border wall while speaking to reporters in the Rose Garden. "And they all know it. Some of them have told me that 'we should have done it.'"

President Trump did not elaborate as to which past presidents had told him they should have built a border wall. However, there are currently only four living past presidents and none appear to have positioned themselves as supporters of Trump's plans for a border wall. Bustle has reached out to the White House for comment.

A spokesperson for former President Barack Obama reportedly declined The Guardian's request for comment but directed reporter Ben Jacobs to some of the former president's previous statements on border walls. Among those was a commencement address Obama made at Rutgers on May 15, 2016, in which he argued that border walls would not stop the biggest challenges facing the nation but rather bring on an isolation that could reverse America's progress.

"The world is more interconnected than ever before, and it's becoming more connected every day. Building walls won't change that," Obama said. Later in the speech he continued:

Suggesting that we can build an endless wall along our borders, and blame our challenges on immigrants — that doesn't just run counter to our history as the world's melting pot; it contradicts the evidence that our growth and our innovation and our dynamism has always been spurred by our ability to attract strivers from every corner of the globe.

A spokesperson for former President Bill Clinton told Politico that the former president did not privately tell Trump he should have built a border wall. "He did not," Politico reported Clinton spokesperson Angel Ureña said. "In fact, they've not talked since the inauguration."

That leaves former President Jimmy Carter, who at 94 is the oldest living president. It's unclear exactly where Carter stands on the issue of a border wall or how much contact he's had with Trump lately. However, in 2017, VOA reported that the former president said he felt technological investments were better than Trump's physical border wall idea while speaking at Emory University in Atlanta, Georgia. According to Politico, Carter has also claimed that Trump "is very careless with the truth."

On Friday, Trump confirmed to reporters that he'd told Congressional Democrats he'd keep the shutdown going for "months or even years" in order to get funding for his border wall.