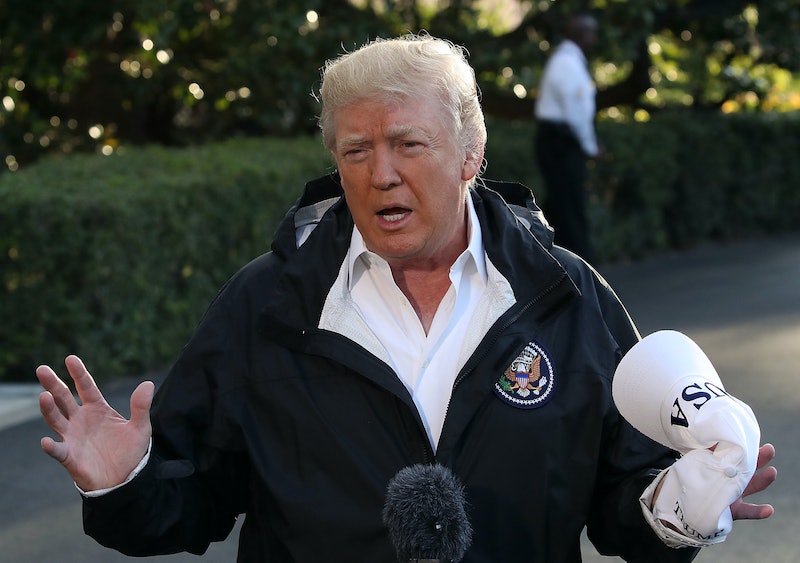 Having arrived in Puerto Rico roughly one week after he announced he'd be visited the storm-stricken U.S. territory, President Donald Trump stirred up controversy again on Tuesday regarding his attitude towards the island's ongoing humanitarian crisis. In a public meeting with local officials and first responders, Trump blamed Puerto Rico for messing up the budget, telling residents, "I hate to tell you, Puerto Rico, you've thrown our budget a little out of whack."

Trump also compared the crisis in Puerto Rico to that of New Orleans during Hurricane Katrina more than a decade ago, seemingly downplaying the severity of what the island currently faces by pointing out its far-lower officially confirmed death toll so far.

Mick Mulvaney is here, right there, and Mick is in charge of a thing called budget. Now, I hate to tell you Puerto Rico, but you've thrown our budget a little out of whack, because we've spent a lot of money on Puerto Rico, and that's fine, we've saved a lot of lives. If you look at ― every death is a horror, but if you look at a real catastrophe like Katrina, and you look at the tremendous hundreds and hundreds and hundreds of people the died, and you look at what happened here with a storm that was totally overpowering, nobody's ever seen anything like this.

"And what is your death count, as of this moment, 17?" Trump continued. When he was told the number was actually 16 people certified dead, the president continued: "16 people certified. 16 people versus, in the thousands. You can be very proud of all of your people, all of our people, working together. 16 people versus literally thousands of people." For the record, Hurricane Katrina is officially estimated to have killed 1,836 people.

There have been reports of another glaringly awkward moment from Trump's meeting, when he crossed paths with Carmen Yulin Cruz, the mayor of San Juan who he attacked on Twitter last week. According to NBC News' Andrea Mitchell, Cruz told Trump that the current situation is "not about politics" when she shook his hand, and he subsequently gave her the cold shoulder.

In all, the Tuesday afternoon meeting and public statement is likely to further inflame criticism of Trump's tact towards the island and people of Puerto Rico, a topic on which he's already shown a startling amount of tone-deafness, making several of the sorts of remarks that would bring hell down upon a president held to a higher degree of expectation.

For example, last week Trump tweeted that "we have done a great job" in Puerto Rico, and blamed perceptions to the contrary on "politically motivated ingrates." He also belittled the "complaints by San Juan Mayor," failing to even refer to her by name, and said "they want everything to be done for them when it should be a community effort."

He also blamed the lagging disaster aid response on the fact that Puerto Rico is an island, surrounded by "a thing called the Atlantic Ocean." And in yet another cringe-inducing moment last week, he ham-fistedly dedicated the trophy for a golf tournament at one of the courses he owns to the victims of hurricanes.

In short, Trump's stewardship of this crisis has, by historical standards, been a tone-deaf, punchy, inflammatory train wreck, and there's really no way to get around that fact. What else arises from his trip to the island remains to be seen, but it's fairly clear that so far, controversy continues to follow him.