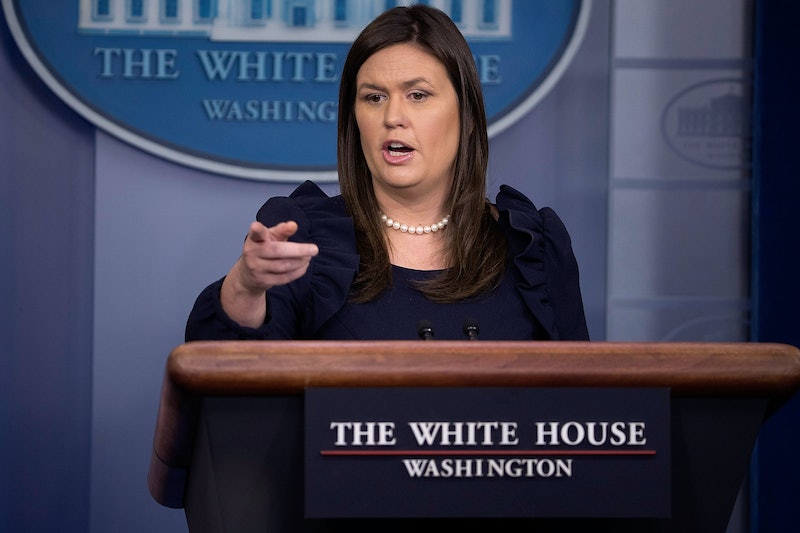 In his tweet, Trump seemed to imply that daily briefings are not worth Sanders' time because of how the media portrays the Trump administration. As the president wrote:

The reason Sarah Sanders does not go to the “podium” much anymore is that the press covers her so rudely & inaccurately, in particular certain members of the press. I told her not to bother, the word gets out anyway! Most will never cover us fairly & hence, the term, Fake News!

During an interview on Fox News on Tuesday, White House deputy press secretary Hogan Gidley also suggested that Sanders has stepped back from spending a lot of time at the podium because Trump frequently speaks to the media on an impromptu basis. “A lot of times when we don’t come to the podium, it’s because the president has addressed the American people himself,” Gidley said on Fox News (via the HuffPost). “ ... Sometimes we see a need to come to the podium and communicate things, and sometimes we don’t."

As the New York Times reported, the Trump administration used to hold press briefings led by its press secretary almost every day. However, recently, Sanders has only been at the podium a handful of times — once in each of the months of September, November, and December 2018.

Transitioning to seemingly monthly press briefings represents a deviation from the norm when compared with press secretaries in previous administrations, the Washington Post indicated. The paper also noted that data from the American Presidency Project revealed that, in addition to holding fewer briefings than her predecessors, Sanders also answers fewer questions than most former press secretaries and often has more contentious interactions with journalists.

On Tuesday, Olivier Knox, the president of the White House Correspondents’ Association, released a statement condemning the decrease in formal White House press briefings. As Knox noted on Twitter:

This retreat from transparency and accountability sets a terrible precedent. Being able to question the press secretary or other senior government officials publicly helps the news media tell Americans what their most powerful representatives are doing in their name. While other avenues exist to obtain information, the robust, public back-and-forth we’ve come to expect in the James S. Brady briefing room helps highlight that no one in a healthy republic is above being questioned.

ABC News reported that the American Presidency Project's data reveals that Sanders' current 35-day absence from the briefing room marks the longest time a presidential administration has ever gone without an on-camera press briefing since they began during the Clinton administration. Moreover, Sanders' 2019 return to the podium is not yet known.

ABC added that, two weeks ago, journalists were reportedly told via an announcement that the press secretary would be giving her first briefing of 2019. However, after journalists gathered in the briefing room, President Trump instead appeared and delivered a statement on border security, ABC revealed. Trump did not take any questions on the matter at that time, the outlet reported.