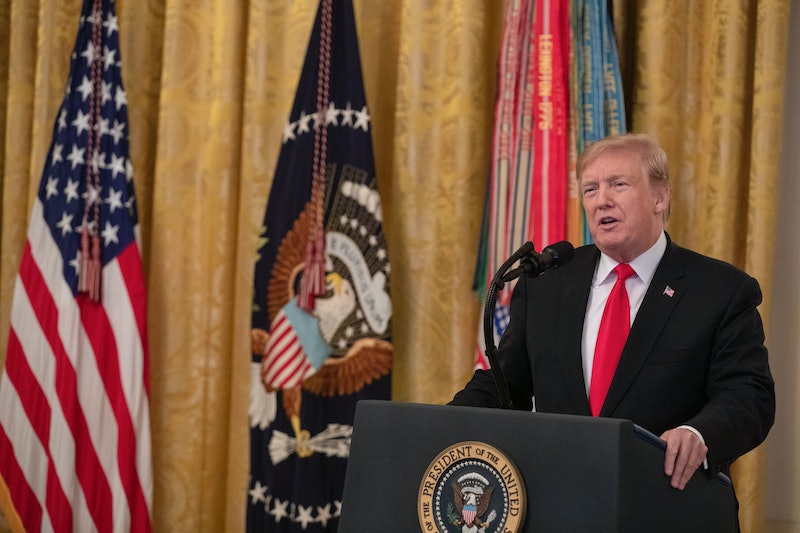 Earlier this week, Education Secretary Betsy DeVos proposed a significant cut to her department's Special Olympics funding. In a budget request to Congress, DeVos called for a nearly $18 million cut to the Special Olympics while simultaneously advocating for increased charter school funding. This proposal prompted outrage from both parties, after which President Donald Trump announced his support for Special Olympics funding, thereby walking back his own administration's budget proposal.

On Thursday, Trump told reporters at the White House that the "Special Olympics will be funded," despite DeVos' earlier defense of the budget proposal before the the House Appropriations subcommittee on education.

As The Washington Post's Seung Min Kim pointed out, only Congress — and not the president — can authorize funding for government programs. That did not stop Trump, however, from telling reporters that he had "overridden" his people, per USA Today.

Not long after Trump's comments, DeVos released a statement suggesting that she actually agreed with the president's opposition to cutting Special Olympics funding. "I am pleased and grateful the president and I see eye-to-eye on this issue, and that he has decided to fund our Special Olympics grant," DeVos said, according to a NBC News' Allan Smith. "This is funding I have fought for behind-the-scenes over the last several years."

DeVos previously criticized news organizations for pushing "falsehoods" about her budget proposal, despite conceding that the Trump administration did, in fact, propose cutting government funding for the Special Olympics.

According to The Washington Post, the government's Special Olympics funding was never in any serious danger, with prominent Democratic and Republican lawmakers pledging to maintain it. DeVos told Illinois Sen. Dick Durbin that she was not "personally involved" in calling for the funding to be cut, but she continued to defend the government's proposal to cut the funding up until Thursday morning, arguing that "the federal government cannot fund every worthy program, particularly ones that enjoy robust support from private donations."

USA Today reported that DeVos was under significant pressure to implement funding cuts after Trump demanded that his Cabinet "get rid of the waste" in government spending, and she argued that the Special Olympics would still be able to sustain itself through private donations. Following Trump's comments to reporters on Thursday, however, DeVos appeared to switch gears, claiming in her statement that she had actually been fighting for the Special Olympics to maintain its funding.

After Trump walked back his administration's budget proposal, California Rep. Barbara Lee — a member of the House Appropriations Committee — said in a statement that it was "shameful it took a massive public outcry for Trump to do the right thing," per MSNBC.

"By the way, Mr. President, Congress decides what the government funds — and we were going to ignore your cruel request anyway," Lee said.

The Trump administration has proposed cuts to Special Olympics funding in the past, but Congress rejected the proposal, and ESPN reported that lawmakers have vowed on a bipartisan basis to reject similar proposals in the future.