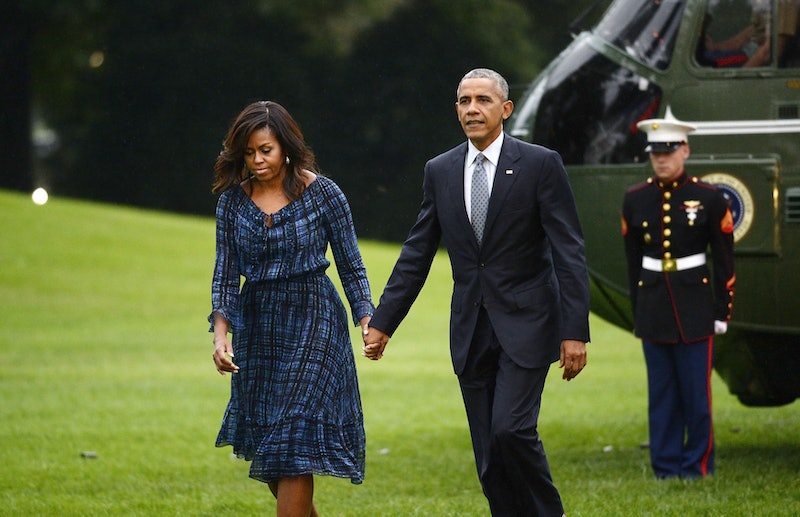 As the government remains partially shut down, President Donald Trump has continually tweeted arguments for the border wall he believes is necessary to protect the U.S.-Mexico border. But on Sunday, those tweets took an unexpected turn. In a message posted late in the weekend on Twitter, Trump says the Obamas' wall around their house is similar in nature to the type of wall he wants to build to separate the United States from Mexico.

"President and Mrs. Obama built/has a ten foot Wall around their D.C. mansion/compound," the president tweeted. "I agree, totally necessary for their safety and security. The U.S. needs the same thing, slightly larger version!"

The Obamas reportedly had a brick wall put in around their temporary home in Washington, D.C, according to The Hill. TMZ first reported on the wall's construction in January of 2017. The wall was reportedly finished later that same year.

The wall around the Obama residence was reportedly built to provide additional security, according to TMZ. However, it goes without saying that a privacy wall around a private residence in Washington, D.C. is much different from the massive project that Trump would like to see come to fruition along the southern border.

The government has remained partially shut down as the president has been embroiled in a battle with Democrats over funding a new border wall. As of Sunday, there were no publicly known negotiations taking place.

Many critics on Twitter took issue with Trump's comparison between the Obamas' privacy wall and the idea of a border wall because it very publicly drew attention to probable security measures put in place to protect a former first family. Additionally, critics also expressed frustration about the president comparing a single household to an entire country.

"1. Secret Service isn't going to love Trump drawing attention to the Obamas' home," tweeted one user. "2. Nor will Michelle, who recently wrote that she will "never forgive" Trump for putting "my family's safety at risk." 3. Economists hate when people compare a nation to a household. They're right."

President Trump has long said that if he were to build a new wall on the southern border, that Mexico would pay for it. But he has requested $5 billion from taxpayers to fund a new partition, which has contributed to the ongoing government shutdown.

One theoretical solution, floated by Sen. Lindsey Graham, revolves around offering Democrats permanent protections for DACA recipients and those with Temporary Status Protection, CBS reports. Graham told reporters on Sunday that he suggested the idea to Trump, who, he said, was interested in the possibility.

"I think that's in the realm of possibility," Graham said, according to CBS. "The president didn't commit, but I think he's very open minded. I know there's some Democrats out there who would be willing to provide money for a wall, border security if we could deal with the DACA population and TPS people."

But exactly what type of agreement might end the ongoing partial shutdown remains entirely unclear as of Sunday afternoon. The precise solution that lawmakers decide on remains a wait and see.