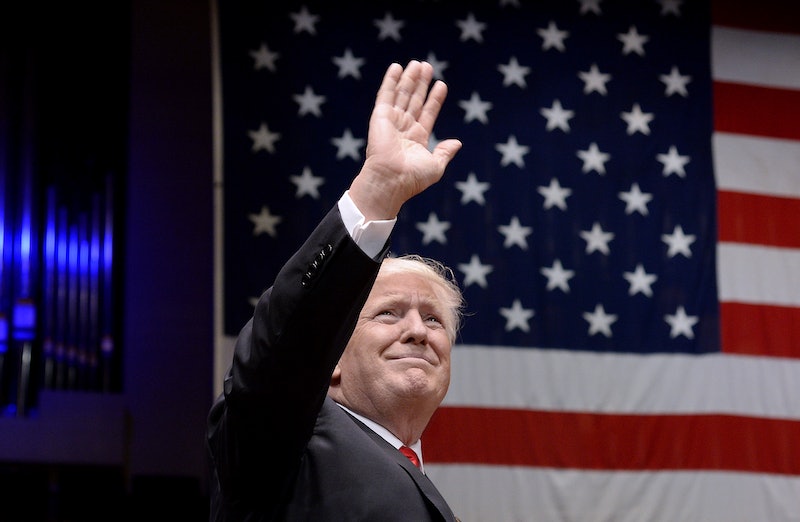 On the 241st anniversary of America's independence, President Donald Trump celebrated the day by tweeting a recording of a choir singing. No, the song wasn't the National Anthem, but a new composition created in honor of the president's campaign slogan. On Tuesday morning, Trump tweeted a choir singing "Make America Great Again," and the reactions are mixed.

While Trump supporters celebrated having a song that embodies some of the principles they voted into the presidency, others were taken aback by the video of the choir singing.

The First Baptist Church in Dallas performed the song during a Saturday "Celebrate Freedom Rally," at the Kennedy Center in Washington, D.C., according to ABC News. Gary Moore, the church's former minister of music, composed the piece. Vox reported that the event was meant to honor military veterans.

Trump spoke at the rally, where he denounced the "fake news media," saying "I'm president and they're not," and told the choir, "Your music honors our heroes more than words will ever do." He also pledged to defend religious liberty as president.

Per ABC News, the lyrics go,

Lift the torch of freedom all across the land

Step into the future joining hand in hand

Americans from ev’ry corner of this blessed land

Come together with one voice

Help us take a stand

Following the vision to make her proud and grand

Like the mighty eagle that is rising on the wind

With a mighty melody oh let the song begin

Each and every state

Reactions to the video ranged from confused to disgusted to angry.

Who Are The Real Patriots?

It Was Full Of White People

Although its lyrics claim unity with the lines "Americans from ev'ry corner of this blessed land/Come together with one voice/Help us take a stand," the choir that sang the MAGA song overwhelmingly visually represented one group: white people. And white Christians, at that. Whether intentional or not, it promotes a vision of America that isn't inclusive of everyone actually in America.

This probably isn't the last we'll see of the MAGA song now that it's being performed in public.