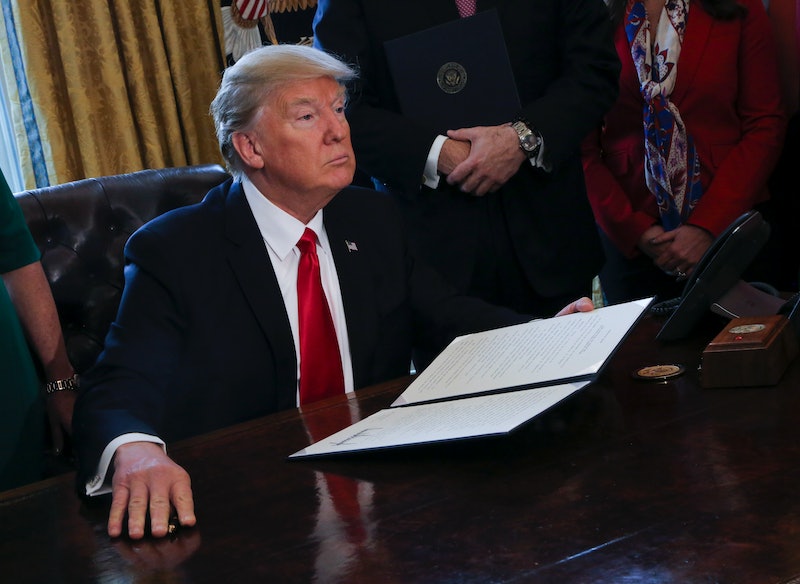 After insisting he was the "law and order" candidate throughout the campaign, Donald Trump has signed three executive orders targeting gangs, drugs, and crime against law enforcement officials.

As attorney general, Sessions will be tasked with executing these new "public safety" orders — specifically, reducing "the threat of rising crime," as Trump explained. "I am directing the Department of Justice to reduce crimes and crimes of violence against law enforcement officers," Trump explained. "It's a shame, what has been happening to our great, our truly great, law enforcement officers. That is going to stop today."

However, as Adam Serwer, senior editor at The Atlantic, pointed out on Twitter, although officer deaths rose in 2016, they are down overall compared to the last 10-plus years. Moreover, it is already illegal to attack an officer, so, as Serwer noted, it remains to be seen what Trump's executive orders would change. Unless, of course, the orders targeted nonviolent crimes against law enforcement, but that doesn't seem likely, given Trump's rhetoric at Sessions' ceremony.

In a time when there have been near-constant public outcry after police shootings of civilians (particularly black civilians), it's interesting that President Trump didn't mention that side of law enforcement reform. In 2016 alone, 1,153 people were killed by police, according to KilledByPolice.net.

During his ceremony, Sessions said that the U.S. has "a crime problem" that may be "a dangerous permanent trend." In an effort to remedy this, Trump's latest executive orders will specifically target what he views as the leading causes of crime: gang members, drug cartels and dealers, and those who commit crimes against cops.

"I wish the rise that we're seeing in crime in America today were some sort of aberration or a blip," Sessions said. "My best judgement, having been involved in criminal law enforcement for many years, is that this is a dangerous, permanent trend that puts the health and safety of America at risk."