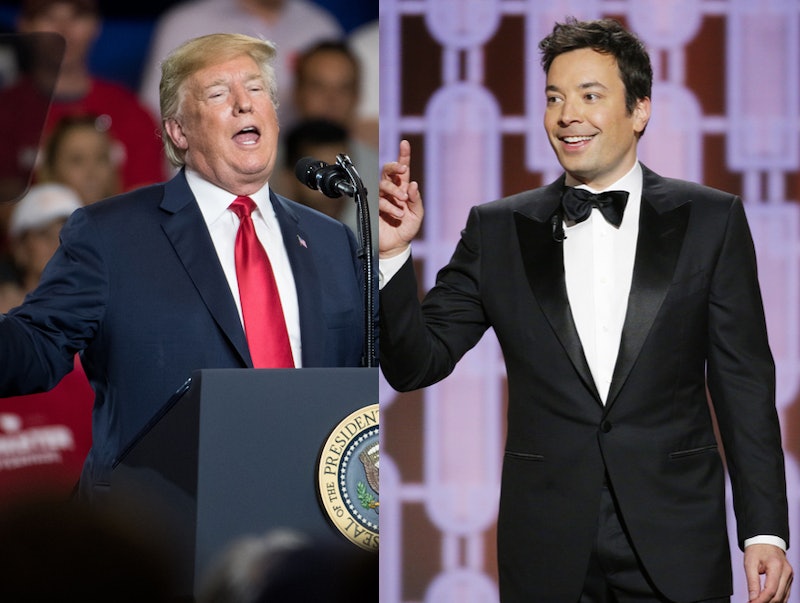 While campaigning for South Carolina Governor Henry McMaster on Monday night, Trump slammed Jimmy Fallon as a "lost soul" and dragged a few other comedians into his speech, as well. Last week, Fallon had talked on air about an interview he conducted with Trump leading up to the 2016 election. More specifically, Fallon addressed the critics who disapproved of how he'd potentially normalized Trump by playfully ruffling up his hair.

Of his interview with Trump in 2016 (for which he received considerable backlash), Fallon had told The Hollywood Reporter he regretted the way he'd handled it. "I'm sorry. I don't want to make anyone angry — I never do and I never will. It's all in the fun of the show. I made a mistake. I'm sorry if I made anyone mad. And, looking back, I would do it differently."

This was a radical departure from how he'd responded to backlash at the time. In one comment to The New York Times in 2017, Fallon said of his decision to keep the interview lighthearted, “I didn’t do it to humanize him. I almost did it to minimize him. I didn’t think that would be a compliment.”

Now, Fallon has becoming increasingly political, and that, combined with his interview with The Hollywood Reporter, has been enough to give the president notice.

In response to Fallon's admission of guilt, Trump tweeted over the weekend that Fallon should "be a man," among other things. In response to that tweet, Fallon announced he was going to donate to RAICES in Trump's name.

Though Fallon didn't specify how much he was going to donate, it seemed to make Trump pay attention. POTUS came after Fallon again during his rally on Monday night. “Did you see Jimmy Fallon?" Trump said to the crowd, which booed heavily. "The guy screws up my hair, going back and forth,” the president continued. “He was disappointed to find out it was real. He couldn't believe it. Well, that's one of the great things I got.”

Trump continued, “Jimmy Fallon apologized for humanizing me, the poor guy, because now he’s going to lose all of us, you know? If somebody would open a talk show at night — because the guy at CBS, he's not funny," Trump said, presumably referencing Stephen Colbert.

Then Trump roped in his third comedian of the night: Jimmy Kimmel. "[Kimmel] would meet me before the election... No talent, but I'd go to his studio... [and] he would stand outside waiting to meet me." Trump then went on to say that he'd never go on Kimmel's show now, adding, "That guy's terrible."

During Fallon's monologue on Monday night (shown in the video below), he addressed his verbal altercation with Trump immediately. He said, "As you may have heard, last night, the president of the United States went after me on Twitter. So Melania, if you’re watching, I don’t think your anti-bullying campaign is working."

“It’s crazy," Fallon said. "The president went after me on Twitter. It’s pretty much the only thing I have in common with NFL players." According to Variety, Fallon made a few more jabs at Trump before closing out his monologue with some non-Trump related humor.

According to The Washington Post, Fallon's recent decision to confront the Trump administration head-on is a departure from his more standard strategy of only discussing Trump in monologues. Fallon has become increasingly political in the wake of such events as the Parkland High School shooting and the white nationalist rally in Charlottesville.

After the events in Charlottesville, Fallon said on air, “Even though The Tonight Show isn’t a political show, it’s my responsibility to stand up against intolerance and extremism as a human being."