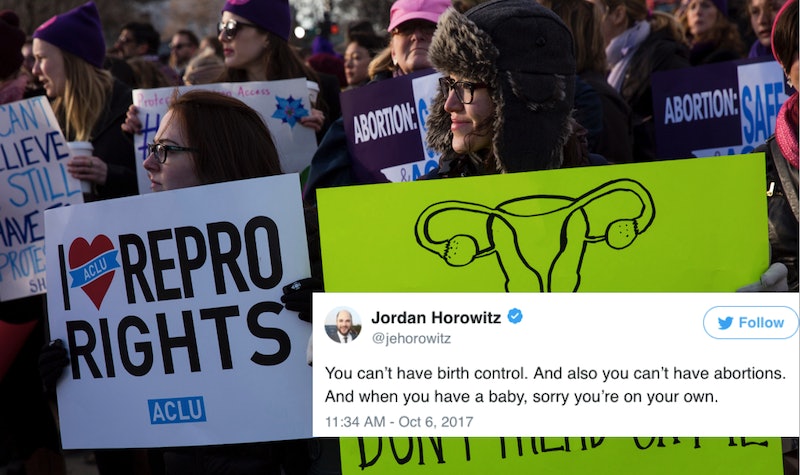 On Friday, Trump rolled back on an Affordable Care Act measure that requires employers to include birth control coverage in their health insurance plans. Under Trump's new rule, any employer can be exempted from providing birth control coverage by citing moral or religious objections. Twitter was livid over Trump gutting birth control access, a move that could potentially affect millions of women. Many tweeted about the new exemption with the hashtag #HandsOffMyBC.

The rule will allow nonprofits, private companies, institutions of higher education, and certain non-government employers to claim exemption to the birth control mandate, according to CNBC. Although the Department of Health and Human Services claims that rules won't affect 99 percent of women who are currently covered, a study by the Obama administration shows that 55 million women currently receive birth control benefits as a result of the federal requirement on employers, according to The New York Times.

Here are some of the most outraged responses to Trump's new birth control exemption:

With All Of The Issues In Our Country

After the Las Vegas shooting left more than 50 dead and more than 500 people injured on Sunday, national debate has focused on passing new gun control legislation that could prevent future mass shootings from happening. A humanitarian crisis is also ravaging Puerto Rico after Hurricane Maria left most of the island residents without clean water or electricity. Amy Siskind, president of The New Agenda, points out that with everything else going on, "Trump and Republicans choose to focus on abortion rights and access to birth control."

References To The Handmaid's Tale

Allusions to The Handmaid's Tale were aplenty on Twitter after the announcement on the Obamacare rollback on Friday. The dystopian novel and series focuses on a futuristic society named Gilead, in which women are stripped of their reproductive and legal rights and forced to serve the country as "handmaids" in order to combat a global fertility crisis.

Cartoon writer Ben Siemon pointed out the similarities with a still from the show, and referenced the 20-week abortion ban that House Republicans passed this week. Siemon wrote: "Remember when they passed that abortion law and took away our birth control in the same week?"

Sorry, You're On Your Own

Twitter user Jordan Horowitz noted the hypocrisy of not wanting people to have right to an abortion, while simultaneously restricting their access to birth control and not giving financial assistance to low-income mothers. "You can't have birth control. And you also can't have abortions. And when you have a baby, sorry you're on your own," Horowitz wrote.

The Latter Prevents The Former

Twitter user Will Horner also wrote that he "never understood how people who can oppose both abortion and free/accessible birth control" because "the latter literally prevents the former."

Cecile Richards, president of Planned Parenthood, wrote on Twitter, "Access to birth control MATTERS. It's brought rates of unplanned pregnancy [and] teen births to modern lows." She also tweeted out an infographic from Vox that shows that teen births have dropped by 51 percent over the last decade.

Birth Control Is Not Just For Preventing Pregnancy

Twitter user @Galination pointed out that "#BirthControl is not just for preventing pregnancy" and women also need it for other reproductive health reasons and to "help manage heavy periods, endrometriosis, etc."

Illinois Representative Jan Schakowsky tweeted that birth control is the "right of women to control their bodies, plan their families, chart their future" and that "it is beyond belief that this is still up for debate."

If Men Hate Using Condoms So Much...

I Wonder What The "Pro-Life" Folks Would Say

Twitter user Caroline O tweeted that she wondered would pro-life people would say about, "someone like me, who uses birth control to manage a potentially fatal vascular disorder...?"

Representative Beto O'Rourke wrote, "62 million women have coverage of birth control and other preventatives without paying out of pocket thanks to Obamacare." He also noted there were 5.1 million women benefiting from this measure in his state of Texas alone.

The Palmer Report tweeted out that while it's still legal to own a machine gun in the United States, having access to birth control isn't a right according to "Trump logic."

Trump's decision to roll back a crucial Obamacare mandate has been held up as yet another attack on reproductive rights in the country. The new rule has reportedly been crafted so as to withstand legal challenges, but organizations are already gearing up for lawsuits against the administration over its latest effort to curtail women's reproductive rights.