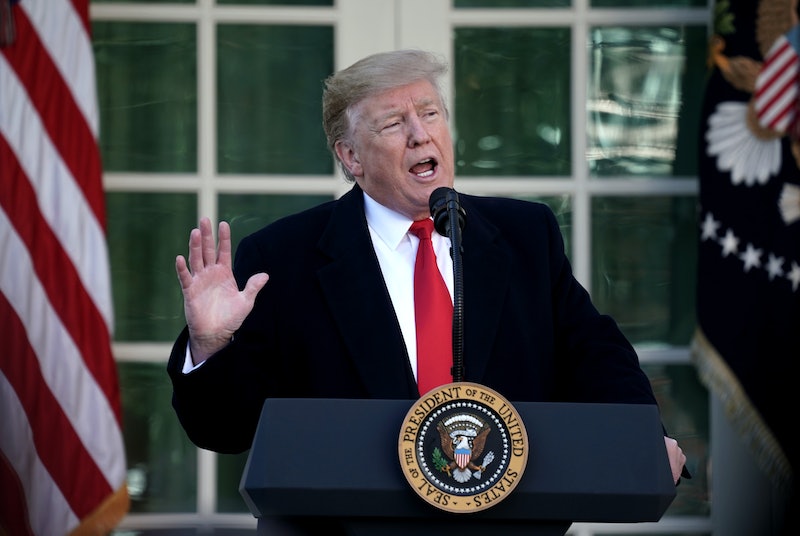 In an interview aired just before the 2019 Super Bowl, President Donald Trump suggested kneeling NFL players should credit him for tackling criminal justice reform. Previously, the president had been a very vocal critic of the ongoing National Anthem protests, which are currently in their third year.

The interview was conducted by CBS' Margaret Brennan, who asked Trump whether or not he believed that NFL athletes refusing to stand for the National Anthem "had a point," according to a transcript of the exchange available on the CBS News website. Specifically, she pointed to former San Francisco 49ers quarterback Colin Kaepernick, who spearheaded the movement back in 2016, asking if the president was "sensitive at all to players like Colin Kaepernick, who— who point out that the majority of victims of police violence are black?"

"Well, you know, I'm the one that had passed judicial reform," Trump said. "And if you look at what I did, criminal judicial reform, and what I've done— President Obama tried. They all tried. Everybody wanted to do it. And I got it done and I've been, you know, really — a lot of people in the NFL have been calling and thanking me for it."

Trump seemed to be referring to the First Step Act, which will expand job training opportunities, early release programs, and alter mandatory sentencing requirements, especially for nonviolent drug offenses, according to The New York Times. The president signed the criminal justice reform bill back in December.

"They have been calling and thanking, you know, that people have been trying to get that taken care of and it's now signed into law and affects tremendous numbers of people, and very good people. I think that when you want to protest I think that's great," Trump told CBS. "But I don't think you do it at the sake of our flag, at the sake of our national anthem."

Earlier in the interview, when the subject of the NFL was first broached, Trump suggested that the league's ratings had significantly improved because there were fewer kneeling protests in the last several months, remarking that players had been "respecting the flag." (Back in October, when the positive trend was first noticed, CBS Sports Chairman Sean McManus told USA Today that, in his view, the improved ratings could partly be attributed to a recent string of positive football-related narratives.)

But in speaking with Brennan, Trump also emphasized that he supported the idea of protest, in general — just not when it came to sitting or kneeling during the National Anthem. For him, he said, that was not an option. However, he noted that his belief was rooted in his own personal opinions.

"I think that people have to, at all times, respect our flag and at all times respect our net — our — our national anthem and our country," he said. "And I think there are plenty of places and times you can protest and you can do a lot. But you can't do that. That's my opinion."