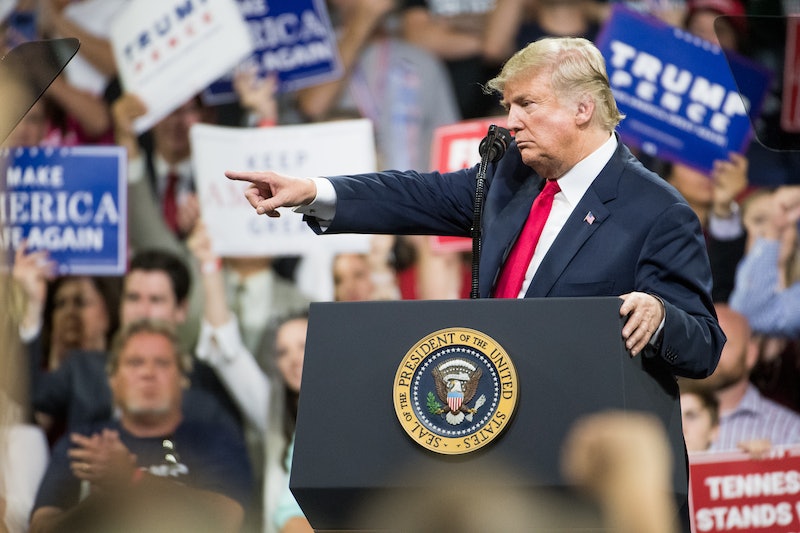 During a rally in Texas on behalf of Senator Ted Cruz on Monday night, Donald Trump told Houston he's a "nationalist" because globalists don't "care about our country so much." This was met with cheers of "U-S-A" by the crowd, despite the fact that Trump's decision to fundamentally eschew globalism as a policy for the United States could have serious and potentially disastrous effects. To make matters even more complicated, Trump even went out of his way to brag about how unpopular he is in other countries, going so far as to claim that this was for a good reason.

To a supportive crowd, Trump said, "Radical Democrats want to turn back the clock [to] the world of the corrupt, power-hungry globalists. You know what a globalist is, right? A globalist is a person who wants the globe to do well, frankly, not caring about our country so much."

Then, Trump added, "And you know what? We can't have that. You know, they have a word, it sort of became old-fashioned. It's called a 'nationalist.' ... You know what I am? A nationalist."

Though Trump's declaration of being a nationalist was certainly shocking enough to make headlines, it wasn't exactly unprecedented; throughout his two years as president, Trump has repeatedly emphasized his desire to prioritize American needs over global alliances, pacts, and norms.

At the Houston rally, for example, he put his nationalist ethos to practice by claiming that Democrats were "encouraging millions of illegal aliens to break our laws, violate our borders and overwhelm our nation." Similarly, in recent days Trump has threatened to cut off aid to three Central American countries (Honduras, El Salvador, and Guatemala) as a retaliatory tactic toward the thousands of migrants marching to the United States border to seek asylum.

In theory, nationalism might seem totally natural: It's essentially the desire to prioritize the interests of your own nation over the interests of other nations in the world. Every society is founded upon elements of nationalism — but it's just as essential to maintain a central globalist perspective, which means that you have a vested interest in the health of the global community.

Trump's extreme nationalism has not balanced by globalist beliefs so far in his presidency. As a result, he's alienated countries that were once the allies of the United States and started a tariff war with China.

Trump's desire to "put America first" inspired his recent speech before the U.N., in which the president received bouts of surprised laughter when he claimed that the United States "has accomplished more than almost any administration in the history of our country."

That U.N. speech seemed to contain the same declaration of nationalism that Trump made on Monday night, if only for the difference that he didn't specifically use that word. But he did emphasize the same principles, saying to a crowd of global leaders, "We will never surrender America's sovereignty to an unelected, unaccountable, global bureaucracy. America is governed by Americans. We reject the ideology of globalism and we embrace the doctrine of patriotism." It's worth noting that patriotism is not the same as nationalism.

CNN reports that Trump's speech to the U.N., unlike other former presidents, didn't garner any applause at any point. He did get plenty of applause and cheering, though, when he announced his nationalist standpoint to the Houston crowd on Monday night.

Following his rally, Trump took to Twitter to remind the country to vote Republican in the midterms in order to continue the "extraordinary prosperity we have achieved" so far.