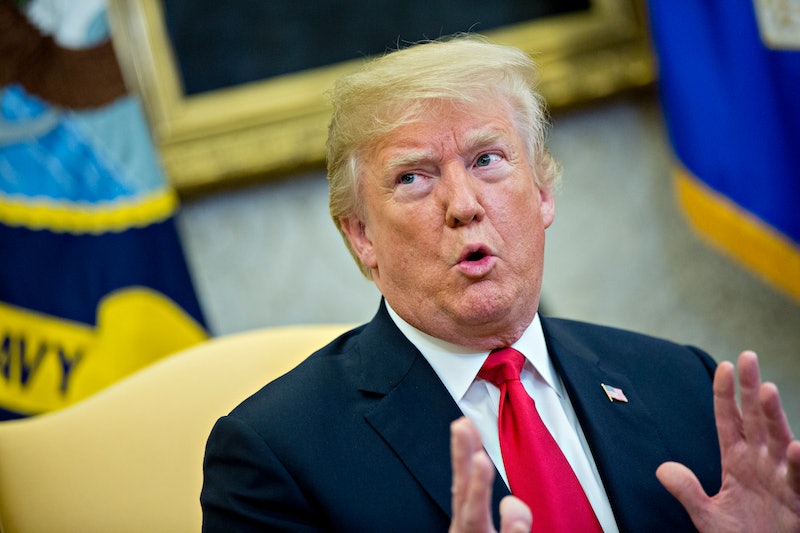 Just one day after the roundtable discussion where President Trump referred to undocumented immigrants as "animals," he is set on trying to defend the statement. People were absolutely outraged after the president made the comparison, but according to him, it wasn't actually as terrible as they thought. In reality, he claims he was only referring to members of the MS-13 gang as "animals". Here is President Trump's original statement in context:

We have people coming into the country, trying to come in, we're stopping a lot of them, but we're taking people out of country, you wouldn't believe how bad these people are. These aren't people, these are animals.

Thursday morning, he clarified his statement, speaking to reporters at the White House, according to The Hill. "We have laws that are laughed at on immigration," he said. "So when the MS-13 comes in, when the other gang members come into our country, I refer to them as animals and guess what? I always will."

That same morning, President Trump's press secretary, Sarah Huckabee Sanders, also elaborated on his comment during a briefing for reporters. And when it came down to it, she couldn't agree more with the president, The Guardian reported. She said:

This is one of the most vicious and deadly gangs that operates by the motto of, 'Rape, control and kill.' If the media and liberals want to defend MS-13, they're more than welcome to. Frankly, I don't think the term that the president used was strong enough.

The "animals" comment itself was a response to Fresno County, California Sheriff Margaret Mims when she expressed the difficulties she faces when telling the Immigration and Customs Enforcement agency about gang members, like those in MS-13.

During the roundtable discussion where the comment was made, California's "sanctuary" law was the main topic. Earlier this month on May 9, the U.S. Justice Department sued the state of California, claiming that it was interfering with federal immigration policies by allowing sanctuary cities to exist. California Governor Jerry Brown, however, said that the law doesn't keep federal immigration officials from doing their jobs, according to ABC News. Still, the lawsuit against it calls the policies unconstitutional. The sanctuary city legislation, which Brown signed into law last year, bars police officers from asking individuals about their immigration status or assisting federal agents with immigration enforcement. These "sanctuary" laws were created to provide legal protection to undocumented immigrants.

After the president's comment went public on Wednesday, he was promptly criticized by both Democrats and immigration rights advocates. "When all of our great-great-grandparents came to America they weren't 'animals,' and these people aren't either," Senate Minority Leader Chuck Schumer, D-NY, tweeted on Wednesday.

Still, as news of the president's comment broke, certain conservative who had been critical of his word usage in the past actually came to his defense. A former White House press secretary for President George W. Bush, Ari Fleischer, for instance, tweeted that the President Trump has used "animals" to describe gang members before, but has never used it to describe undocumented immigrants so the press should have known the difference. "His previous language should have been a clue, but some things are too good to check," Fleischer tweeted.

This isn't the first time that President Trump has used the term "animals" to describe MS-13 members. He's referred to them as such many times in the past at a rally in Moon Township, Pennsylvania, during the Conservative Political Action Conference in Washington's Maryland suburbs, and even at a safety meeting at the White House after the Parkland school shooting, NBC News reported. He has also used the term to describe school shooters and terrorists.