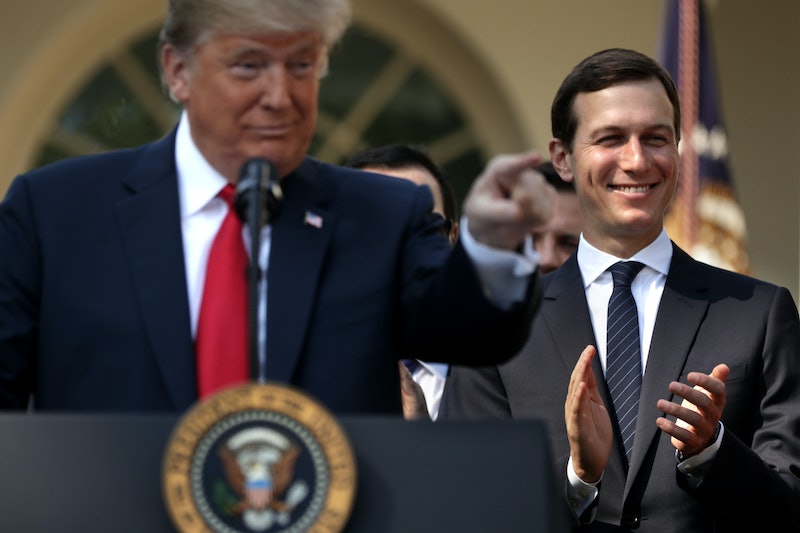 Trump administration officials reportedly told The Washington Post on Saturday that President Donald Trump said Jared Kushner's Saudi Arabia ties are a liability. The relationship has come under a microscope following the disappearance and death of journalist Jamal Khashoggi at the Saudi consulate in Turkey.

"Trump had told reporters Friday that the Saudi explanation was credible, but U.S. officials said he has privately grimaced that his son-in-law Jared Kushner’s close relationship with the crown prince has become a liability and left the White House with no good options," Washington Post reporter Josh Hudson wrote.

Trump also suggested Kushner's youth may be hurting the situation, more than helping.

"They're two young guys. Jared doesn't know him well or anything," Trump told The Washington Post about Kushner's relationship with Saudi Crown Prince Mohammed bin Salman. "They are just two young people. They are the same age. They like each other, I believe."

An American official told The Post that Kushner's relationship with Saudi Crown Prince Mohammed bin Salman could open the Trump administration to criticism about the close relationship with Saudi Arabia. Post reporter Josh Hudson wrote that the president "is annoyed by a sense that he was blindsided and by what he sees as Kushner’s misjudgment."

Saudi officials have claimed Khashoggi, who wrote for The Washington Post, died after a fistfight at the consulate in Istanbul, which he entered on Oct. 2. (Initially, officials said Khashoggi had left the consulate.)

In the interview with The Post, Trump criticized the Saudi government changing explanations. Trump said, "Obviously there's been deception, and there's been lies," but he defended Saudi Arabia as an "incredible ally."

Further complicating the American response to the death of Khashoggi is an audio recording that Turkish investigators said shows that the Washington Post journalist was killed and then dismembered by a team of more than a dozen Saudi men inside the consulate.

"I've heard all about the videos or the tapes. Nobody would get it faster than me. Nobody has been able to show it to me," Trump told The Washington Post.

U.S. Secretary of State Mike Pompeo told reporters that he stressed the importance of a transparent investigation into the Khashoggi's death.

"We talked about the importance of the investigation, completing it in a timely fashion, and making sure that it was sufficiently transparent that we could evaluate the work that had been done to get to the bottom of it," Pompeo told reporters from a tarmac in Saudi Arabia's capital, Riyadh, before he left the kingdom, according to The Washington Post. "So that was the purpose of the visit. In that sense it was incredibly successful."

More like this
Are John Legend & Kanye West Still Friends? The Singer’s Latest Update Is Candid
By Brad Witter
Why Eurovision 2023's Host City Won’t Be Revealed For A While Yet
By Sam Ramsden and Rachel Mantock
Christina Aguilera Took A Powerful Stand At Brighton Pride
By Sam Ramsden
'Scream’s Courteney Cox Has Broken A Major Horror Record
By Sophie McEvoy
Get Even More From Bustle — Sign Up For The Newsletter