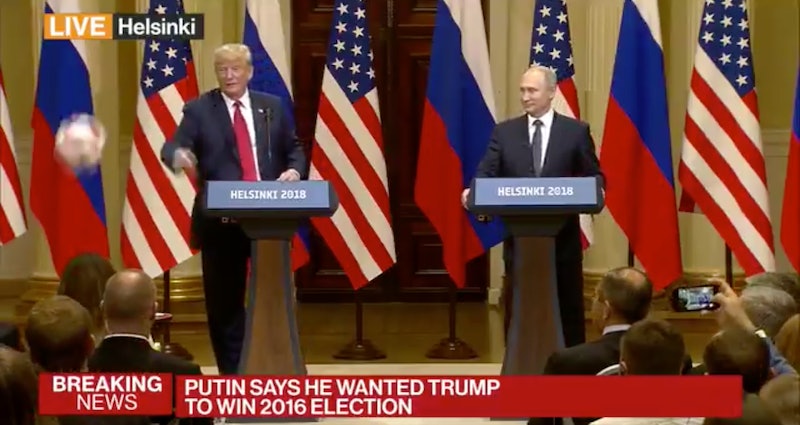 One of the big issues that came up at the beginning and the end of Trump's summit with Putin was the all-important topic of the World Cup. President Trump praised the Russian leader at the beginning and end of the meetings for hosting such a "really great World Cup." But the must-see moment is when Trump threw Melania Putin's soccer ball.

That's right, during the press conference — which will be analyzed for days — Putin takes a soccer ball and gives it to Trump, saying the ball is now in his court. That's in reference to the FIFA World Cup, which just ended in Russia. Trump had been praising Moscow's hosting of the cup, and Putin noted that the U.S., together with Canada and Mexico, will host the next one.

Trump responded, "Thank you very much, we do host it. And we hope we do as good a job. That is very nice. That will go to my son Barron, we have no question. Melania, here you go."

Trump then tosses it in the general direction of the first lady, and it appears to bounce a couple times. Photos taken later show Melania with the ball, smiling. Some outlets reported that Secretary of State Mike Pompeo gave the ball to Melania.

Some other key issues were not given the same focus as the World Cup, including Russian election meddling which neither side wanted to talk about for long. Trump made it clear he wouldn't criticize his Russian counterpart for it. "I have [asked] President Putin, he just said it’s not Russia. I don’t see any reason why it would be,” Trump said.

The World Cup, though, didn't just come up at the end of the day during the press conference, it also was one of the first things Trump addressed during the morning:

First of all Mr President I’d like to congratulate you on a really great World Cup. One of the best ever from what everybody tells me and also for your team, itself, doing so well. I watched quite a bit and in the United States we call it soccer and I watched quite a bit of it and I watched the entire final and the semi-finals and they were really spectacular games, but it was beautifully done so congratulations on that.

The World Cup was also on the minds of Trump's detractors before the summit. Hillary Clinton, who ran against Trump for the presidency, trolled using the tournament. "Great World Cup," Clinton tweeted. "Question for President Trump as he meets Putin: Do you know which team you play for?"

Even a top Republican used the soccer ball to point out what he saw as Trump's failure at the summit. "Missed opportunity by President Trump to firmly hold Russia accountable for 2016 meddling and deliver a strong warning regarding future elections," Republican Sen. Lindsey Graham wrote on Twitter. "This answer by President Trump will be seen by Russia as a sign of weakness and create far more problems than it solves."

He then called out the ball in particular:

If it were me, I’d check the soccer ball for listening devices and never allow it in the White House.

Trump had also tweeted about the games in advance of Helsinki, not only recognizing France's win but also Putin's hosting. "Congratulations to France, who played extraordinary soccer, on winning the 2018 World Cup. Additionally, congratulations to President Putin and Russia for putting on a truly great World Cup Tournament — one of the best ever!"

The tweet, though, could never match the moment when Putin gave Trump the ball or when the president lobbed it in the direction of his wife.