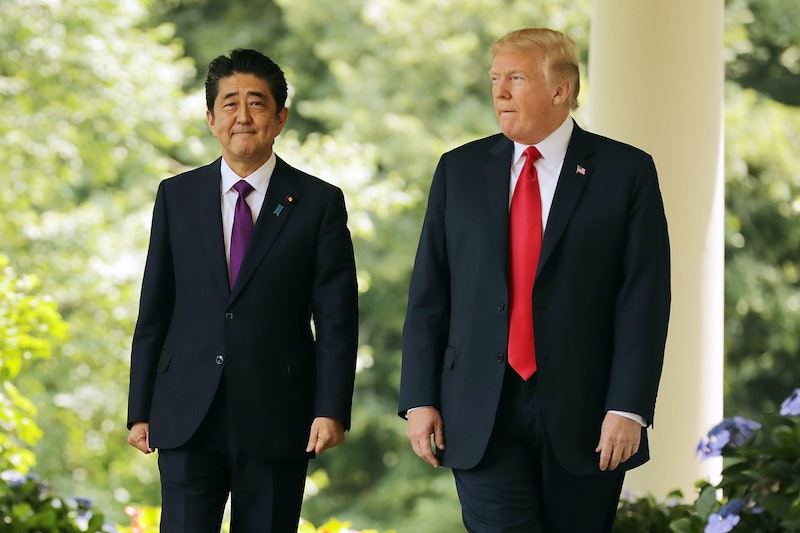 While talking to Japanese Prime Minister Shinzo Abe at the G-7 summit, President Trump told Abe he'd send 25 million Mexicans to Japan, the Wall Street Journal reports, and that this would ensure Abe's defeat in the next Japanese election. Trump was reportedly not being serious, but rather attempting to make a rhetorical argument against lenient immigration policies. Bustle has reached out to the White House for confirmation on the reports.

"Shinzo, you don’t have this problem, but I can send you 25 million Mexicans and you’ll be out of office very soon," Trump reportedly told Abe after remarking that immigration is a big problem in Europe.

Trump has long claimed that millions of immigrants voted illegally in the 2016 presidential election, and that this is the only reason he lost the popular vote. He has not presented any evidence to support this claim, however, and NBC News, NPR, Snopes and many other outlets have been unable to find any facts to back it up. Trump's own lawyers wrote in a court briefing that "all available evidence suggests that the 2016 election was not tainted by fraud or mistake."

More broadly, the president has often pointed to other countries as evidence of the supposed dangers of open-borders immigration policies. During a conversation about Iran and terrorism at the summit, the Journal reports, Trump turned to French President Emmanuel Macron and said, "you must know about this, Emmanuel, because all the terrorists are in Paris."

At a rally in 2017, Trump told supporters to "look at what's happening last night in Sweden," falsely implying that there had been a violent incident in Sweden the night before.

"Sweden!," Trump said at the Florida rally. "Who would believe this? Sweden! They're taking in large numbers [of immigrants], they're having problems nobody thought was possible."

The Swedish Embassy in the United States responded that it was "unclear to us what President Trump was referring to," there had been no reported violence, immigration-related or otherwise, in the country the night before. Trump later clarified that he was talking about a television special about Sweden he'd seen on Fox News the night before.

The G-7 summit was reportedly contentious on a number of other fronts. Toward the end of the summit, Trump abruptly backed out of a group statement by the other countries' leaders, citing unspecified "false statements" that he claims Canadian Prime Minister Justin Trudeau made. This was the first time in G-7 history that the final group statement, or communiqué, wasn't endorsed by every country, the Journal reports.

After the summit, Trudeau gave a press conference at which he denounced American tariffs and announced that Canada will implement retaliatory tariffs against the United States. Shortly thereafter, Trump attacked Trudeau on Twitter, accusing him of acting "meek and mild" during a closed-door meeting only to talk tough at the subsequent presser.

Trudeau's office responded in a statement, saying that the prime minister "said nothing [at the press conference] he hasn’t said before — both in public, and in private conversations with the president." Nevertheless, Trump's trade advisor Pete Navarro told Fox News that Trudeau will be going to hell for his stance on tariffs.

The Washington Post reports that Trump also caused friction with his foreign counterparts at the G-7 by threatening to impose auto tariffs, insisting that Russia be re-admitted into the G-7 (from which it was expelled in 2014 for invading and annexing Crimea), and refusing to endorse a group statement in which the world leaders pledged to fight climate change. According to CNN, Trump also arrived late to a group meeting about gender diversity.