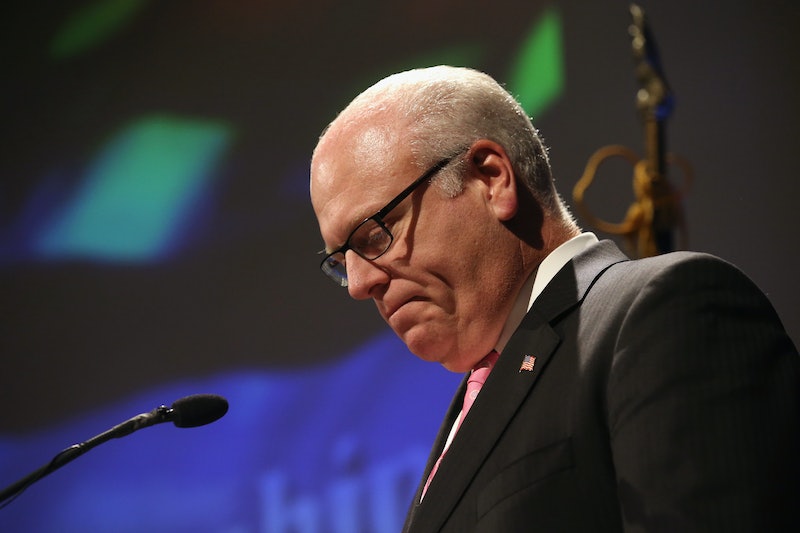 Tuesday's primary elections resulted in some shocking victories and defeats — and Donald Trump wasted little time when it came to providing commentary on the evening's results. Indeed, Trump tweeted that Joe Crowley could've defeated Alexandria Ocasio-Cortez if he was "nicer ... to his president," seeming to imply that presidential reverence is key to electoral success.

President Trump's tweet was referring to Crowley's surprising defeat in the New York Democratic primary on Tuesday night. Crowley has served in Congress since 1999 and was considered a top-ranking Democrat with a strong likelihood of succeeding Nancy Pelosi as the party's leader. On Tuesday, Crowley was defeated by Alexandria Ocasio-Cortez, a first-time congressional candidate who ran significantly to the left of Crowley.

President Trump took to Twitter to comment on Crowley's unexpected defeat, seeming to suggest that Crowley's attitude toward the president played a role in the outcome of the primary election. As Trump put it:

Wow! Big Trump Hater Congressman Joe Crowley, who many expected was going to take Nancy Pelosi’s place, just LOST his primary election. In other words, he’s out! That is a big one that nobody saw happening. Perhaps he should have been nicer, and more respectful, to his President!

As Vox described, the notion that Crowley was defeated because of his stance on Trump's presidency is likely inaccurate. The outlet noted that Ocasio-Cortez has seemingly been even more critical of Trump during her campaign, including through her condemnation of Trump's immigration policies and her call to abolish the U.S. Immigration and Customs Enforcement (ICE) agency. Instead, as Vox reported, Crowley's defeat was likely due to the fact voters in the highly Democratic district perhaps desired a change from the status quo and thus elected a more progressive first-time candidate. And, as the outlet patently pointed out, Crowley's loss was therefore likely not due to his (Trump-suggested) lack of respect for the president.

Ocasio-Cortez's victory over Crowley was not only ground-breaking, but also quite substantial. With 97 percent of precincts reporting, Ocasio-Cortez secured 57 percent of the vote, compared with Crowley's 42 percent.

Ocasio-Cortez's victory has received particular attention both because she defeated a long-term Democratic incumbent (and did so with much less campaign funding) and because she has advocated for some highly progressive policies. Indeed, her platform includes providing Medicare for everyone, offering higher education opportunities to all, and establishing housing as a human right, among other policies.

On Tuesday evening, Crowley took to Twitter to congratulate Ocasio-Cortez for her victory and to criticize the Trump administration's policies. As Crowley wrote:

It has been the honor of a lifetime to represent Queens and the Bronx. I am proud of the race we ran and, more importantly, proud of all of the work we’ve done to advance this community ... I want to congratulate @Ocasio2018. I look forward to supporting her and all Democrats this November. The Trump administration is a threat to everything we stand for here in Queens and the Bronx, and if we don't win back the House this November, we will lose the nation we love.

For her part, Ocasio-Cortez expressed her excitement on Twitter, starting a thread reflecting on her campaign in the lead-up to the closing of the polls on Tuesday evening. Ocasio-Cortez began the thread by writing:

Almost two years ago, I started what was then a completely ‘impossible’ bid for Congress. Since then, everything has changed. Now, there’s only 20 minutes left. And it feels great ...

Overall, Crowley's defeat by Ocasio-Cortez has drawn the attention of many, including President Trump, who seemingly has some strong opinions about why Crowley may have lost. You can bet that the president — and many members of the public — will be watching closely as Ocasio-Cortez competes in the upcoming general elections in November.