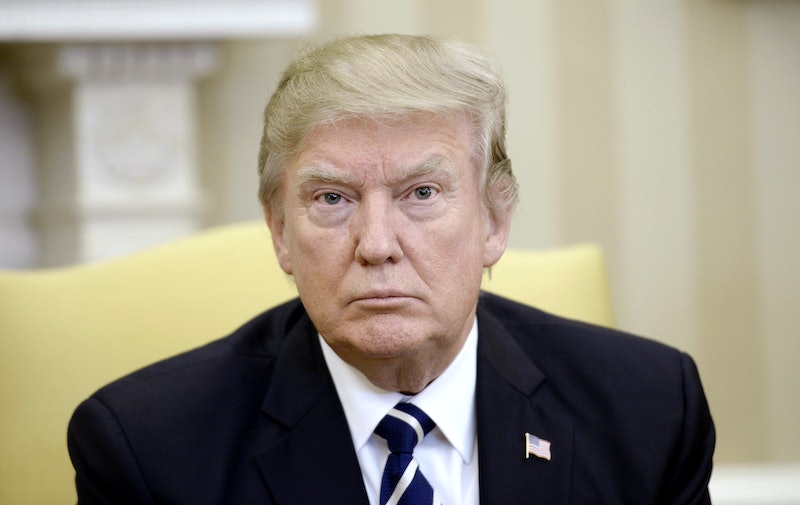 In response to a suspected chemical weapons attack in Syria that killed dozens, an official statement from President Donald Trump blamed the attack on the Obama administration. Specifically, the statement condemned the attack as "reprehensible," and said it "cannot be ignored by the civilized world." It then went on to call the apparent atrocity "a consequence of the past administration's weakness and irresolution," and invoked former president Barack Obama's 2012 "red line" comment about Syrian use of chemical weapons.

Here's the statement the White House put out in full. It was initially read out by Press Secretary Sean Spicer during his off-camera briefing on Tuesday afternoon, but was soon released under Trump's own name, making it the official response from the president of the United States.

Today's chemical attack in Syria against innocent people, including women and children, is reprehensible and cannot be ignored by the civilized world. These heinous actions by the Bashar al-Assad regime are a consequence of the past administration's weakness and irresolution. President Obama said in 2012 that he would establish a "red line" against the use of chemical weapons and then did nothing. The United States stands with our allies across the globe to condemn this intolerable attack.

Trump's condemnation of Obama's policy toward Syria is notable, because it's the exact opposite of what he publicly urged the former president to do at the time. Let's just say that the president's years-long Twitter habit has once again come back to bite him.

Back in 2013, in the aftermath of the chemical weapons attack that initially crossed Obama's rhetorical red line, Trump took to Twitter to explicitly insist he not take military action, urging the president to instead "save [his] powder" for another day. It's not at all uncommon to find an old Trump tweet that undercuts whatever he's talking about in the here and now, but this is a particularly vivid example.

"No upside and tremendous downside," suffice to say, is not a subtle analysis. Make no mistake: Trump opposed military intervention in Syria back when Obama was in office, and whatever your opinion about what should've been done, him now blaming this on Obama is at bare minimum a hypocrisy.

The statement makes no mention of what changes, if any, this incident will cause in U.S. policy regarding Syria. Just days prior to the attack, Spicer referred to the brutal and authoritarian rule of Assad as a "political reality," which would seem to suggest the White House doesn't see a practical way to change things. Spicer also said that Trump would not "telegraph what he is going to do" during his Tuesday briefing, however, meaning some sort of escalation in U.S. military involvement in Syria could still conceivably be on the way. The only way to know for sure is to wait and see.