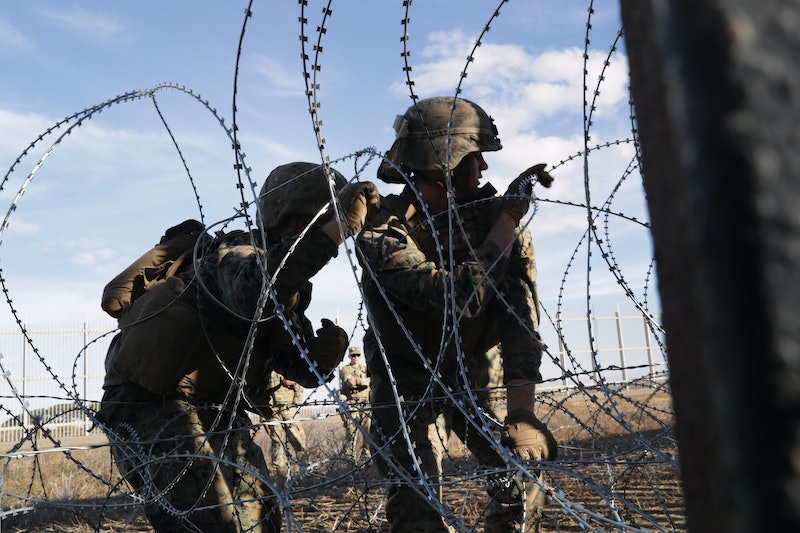 Despite the longest government shutdown in U.S. history, President Donald Trump does not have money for his proposed border wall. Now, according to a Tuesday morning tweet, the president is looking at other options — feasible or not. Trump tweeted about a "human wall" along the border, along with his move to send additional troops. Whether service members could form part of such a wall is far from clear, though.

"Tremendous numbers of people are coming up through Mexico in the hopes of flooding our Southern Border," Trump wrote. "We have sent additional military. We will build a Human Wall if necessary. If we had a real Wall, this would be a non-event!" Apprehensions at the border did rise slightly in the most recent fiscal year but are still at historic lows.

There are 3,750 more troops being sent to the border by the Defense Department at the request of the Department of Homeland Security (DHS). That will bring the total number of troops to 4,350, but their mission is specific to mobile surveillance and adding about 150 miles of concertina wire. Bustle has reached out to DHS, the Department of Defense, Customs and Border Patrol (CBP), and the White House for comment. CBP declined to comment.

The Associated Press reported in October, when troops were first sent by Trump to the border, that service members were prohibited by federal law from engaging in law enforcement on U.S. soil. According to the AP, that means they can't stop or detain any migrants.

Then in November, Trump said that soldiers could use "lethal force" on migrants. "If they have to, they're gonna use lethal force," he said. "I've — I've given the OK. If they have to. I hope they don't have to." Specifically, the order allowed this while protecting border patrol staff. That order came as a "Cabinet order" signed by then-Chief of Staff John Kelly, the Military Times reported.

According to the order obtained by the Military Times, military personnel are allowed to "perform those military protective activities that the Secretary of Defense determines are reasonably necessary" — including "a show or use of force (including lethal force, where necessary), crowd control, temporary detention, and cursory search."

Critics say that's illegal. "The Posse Comitatus Act keeps the President from using troops to enforce domestic policy," Joyce Alene, a University of Alabama law professor and former U.S. Attorney under President Obama wrote on Twitter in November. "Only Trump would think to violate it & as all things with Trump, once you violate a norm, it’s a fast slide down the slippery slope."

Meanwhile, those watching Trump's attempts to have a concrete wall — or any wall — built along the southern border can hardly believe Trump's tweet. "I actually joked in a CNN article I wrote last month that Trump could call for a human wall with border agents linking arms to cover the 2,000 miles of the border but like the wall it would be inefficient and cost too much to taxpayers," Dean Obeidallah, a radio host and Daily Beast columnist, tweeted on Tuesday. "But now Trump has proposed a human wall!"

No word on whether the human wall will be featured in the State of the Union Tuesday night, but border security will surely come up.