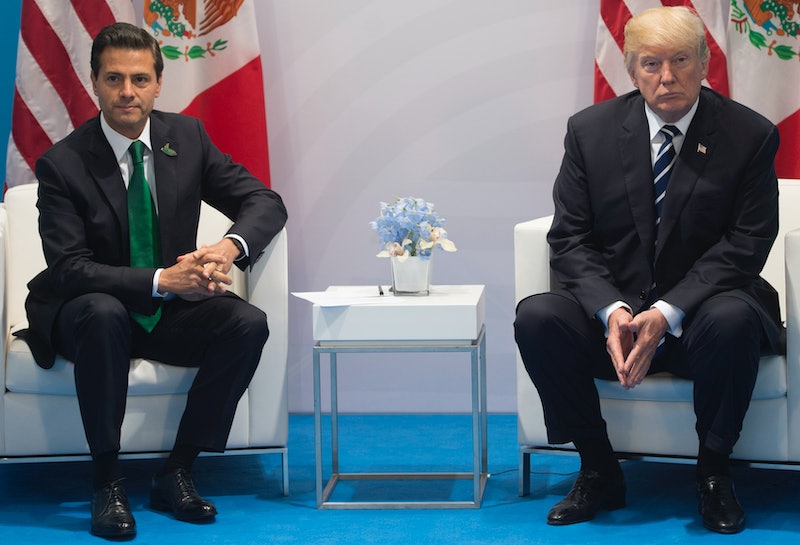 On Sunday, Mexico issued a statement offering, as a neighbor, to provide assistance to the United States in the wake of Hurricane Harvey. On Tuesday, the country made the formal offer to the U.S. State Department. Interestingly, thus far President Donald Trump has not chosen to take Mexico up on its offer and has not tweeted or commented himself on the matter. Instead, the White House and State Department have only issued statements noting awareness of the offer.

Mexico's offer on Sunday came after a tweet Trump published regarding how he expects Mexico to pay for a border wall with the United States. Trump's tweet read, "With Mexico being one of the highest crime Nations in the world, we must have THE WALL. Mexico will pay for it through reimbursement/other.”

In response, Mexico's Foreign Ministry issued a statement, reiterating that it would not pay for the wall "under any circumstances" and noted that crime is a "shared problem" for both the United States and Mexico. Toward the end of the statement, Mexico also offered help for Harvey recovery, saying

The Mexican government takes this opportunity to express its full solidarity with the people and government of the United States for the damages caused by Hurricane Harvey in Texas, and express that we have offered the US government help and cooperation to be provided by different Mexican government agencies to deal with the impacts of this natural disaster — as good neighbors should always do in difficult times.

Notably, Trump did not reply to Mexico's offer of assistance via Twitter. Instead, the White House and State Department merely issued the same statements, which read "If a need for assistance does arise, we will work with our partners, including Mexico, to determine the best way forward." Moreover, the White House told The Hill on Tuesday,

The White House is grateful for the outpouring of support coming in from around the world ... We are aware of Mexico's offer, and FEMA is coordinating with the State Department on the appropriate next steps.

Carlos Sada Solana, Mexico's foreign undersecretary for North America, told the Huffington Post that the country's offer of assistance is "ongoing and permanent," meaning that Trump could still accept the aid if he chooses.

Trump's lack of response to Mexico's offer thus far has irked some on social media, who have accused the president of doing a disservice to the victims of Harvey by not immediately taking Mexico up on its offer. Other social media users have also noted that Mexico provided substantial aid to the United States after Hurricane Katrina, saving American lives in the process — and they are wondering why, thus far, Trump is not allowing the country to do the same post-Harvey.

You can be sure that many people will be closely watching to see if, in the coming days, Trump does decide to accept Mexico's offer of assitance of if he will continue to remain mum on the matter.

More like this
Iran Has Issued A Death Sentence Over Mahsa Amini Protests
By Catharina Cheung, Darshita Goyal and Maxine Harrison
Buckingham Palace Aide Resigns Over “Unacceptable” Comments To A Black Guest
By Shahed Ezaydi
Joe Lycett Just Took HIs David Beckham Qatar Protest To A Whole New Level
By Sophie McEvoy
What To Know About Martin Bashir After Watching 'The Crown'
By Bustle UK
Get Even More From Bustle — Sign Up For The Newsletter