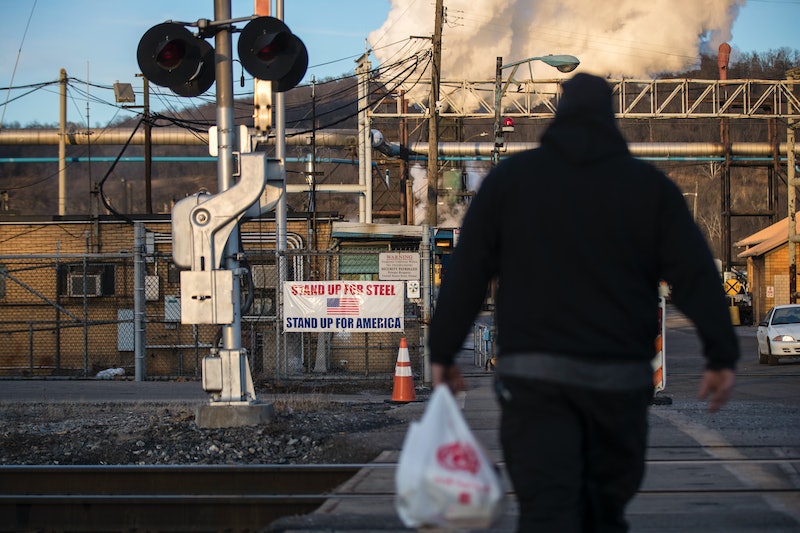 On Tuesday morning, the Trump administration will reportedly announce its plans to propose the Affordable Clean Energy plan (ACE), as a replacement for the Obama-era Clean Power Plan. ACE, if approved, will work to roll back all of the initiatives set forth in the Clean Power Plan that aimed to reduce carbon emissions in the United States by 2030 — but that's not the full story. Trump wants to undo Obama's Clean Power Plan, but it never fully went into effect to begin with. Bustle has reached out to the White House for comment.

The Clean Power Plan was passed in 2015, but since then, it's been subject to a series of freezes, pauses, and reviews, with Trump finally announcing his intentions to defund the plan entirely in the 2018 budget. So, the newly proposed ACE plan, which will supposedly leave all control to states in terms of regulating emissions, isn't necessarily going to make air quality worse than it is now; it's just not going to help improve it, which a coalition of scientists (as well as most other countries) have determined is absolutely necessary, if climate change is to be halted or even slowed down.

In other words, the Clean Power Plan was never given a runway to begin with, and the Trump administration has been stonewalling it for the last two years.

The aim of the Clean Power Plan was to require all states to decrease their carbon emission by 32 percent by 2030, through replacing coal power with natural gas and renewable energy sources. The domestic pledge was a part of the United States' commitment to the Paris agreement, which has united 125 countries under a common goal to keep temperature change to two degrees Celsius or less over the next century. The United States has since left the Paris agreement under the Trump administration.

Trump has repeatedly made promises to his voter base to revive the flagging coal industry, even referencing in his inaugural speech that his administration would "end the war on good, clean coal."

At a fundraiser in New York last week, Trump said of the return to a coal-powered energy focus,

It's clean coal and we have the most modern procedures ... it's a tremendous form of energy in the sense that in a military way-think of it-coal is indestructible. You can blow up a pipeline, you can blow up the windmills ... they kill so many birds. You look underneath some of those windmills, it's like a killing field, the birds.

The Washington Post reports that Trump's ACE plan will release over 12 times the amount of carbon dioxide into the atmosphere compared to the Clean Power Plan, if either were to be fully implemented.

If you're upset about the idea of cutting all federal regulation for carbon emissions at a time when other countries are pledging to cut their carbon emissions significantly, the best thing you can do is be an informed voter. The ACE plan will be under public review for the next several months, so the results of the 2018 midterms (as well as the 2020 presidential election) will be monumental in terms of the direction this country will take in response to climate change over the coming decades.