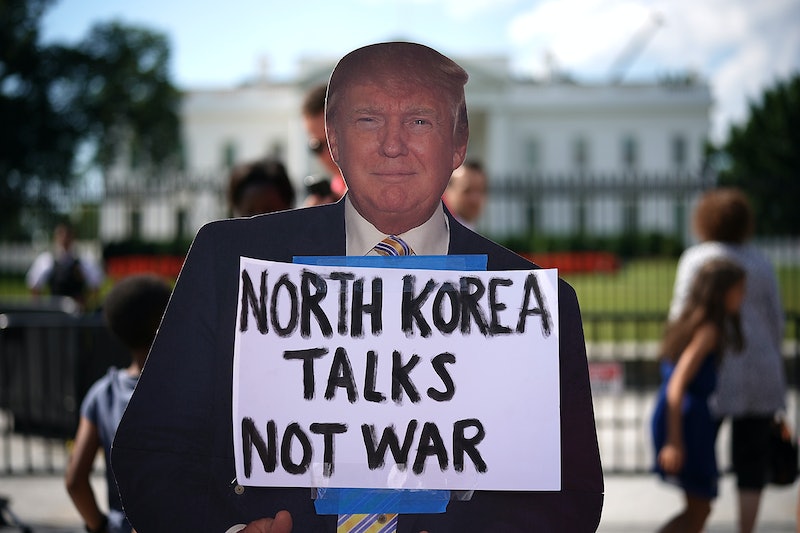 On Friday morning, President Trump took to Twitter to threaten Kim Jong-Un that American military systems are cocked and ready to react, should he "act unwisely." President Trump warned that the military is "locked and loaded" on North Korea, further escalating tensions with the hermit kingdom.

Trump wrote in a tweet early on Friday morning:

This is building on the increasingly war-like rhetoric the president's used regarding the so-called hermit kingdom over the last couple of days; this began with a speech when he said that he would meet any North Korean threat with "fire, fury, and frankly power the likes of which this world has never seen before." Various White House staff members were reportedly caught off guard by the president's supposedly improvised remark, but Trump has not backed down from it.

This latest tweet, combined with the previous speech, will certainly not do anything to calm the world's fears of an impending nuclear war between two leaders who are seen as irrational and reactive. Kim threatened to launch missiles at Guam, a strategically important U.S. territory in the Pacific. While presidents before him have endeavored to downplay such threats, Trump has responded in kind — now, multiple times.

Trump's latest tweet offers a lot to unpack on several fronts. By using the term "military solutions," Trump doesn't explicitly say anything about nuclear weapons, although some observers will certainly take it as such. There has already been debate about what "fire and fury" means specifically, and this tweet surely will not dampen that. Kim had also made the vague threat of "making an enveloping fire" around Guam, which many took to mean that he was threatening the U.S. with nuclear war.

The last line of the tweet implies that Trump thinks that Kim Jong-Un has completely decided to bomb Guam when it becomes possible. This, however, is far from certain.

Kim is a shrewd enough leader to know that unprovoked military action against the U.S. would result in the end of his reign, and, likely, a war leading to regime change in North Korea. While he may seem irrational, Kim has not shown any signs of being reckless enough to give up his power and put his life at risk.

The most likely scenario is that Kim is trying to provoke the U.S. to attack first, which would fulfill their national myth that they've always been under attack from the U.S. — and with tweets like this, Trump is playing directly into that myth.