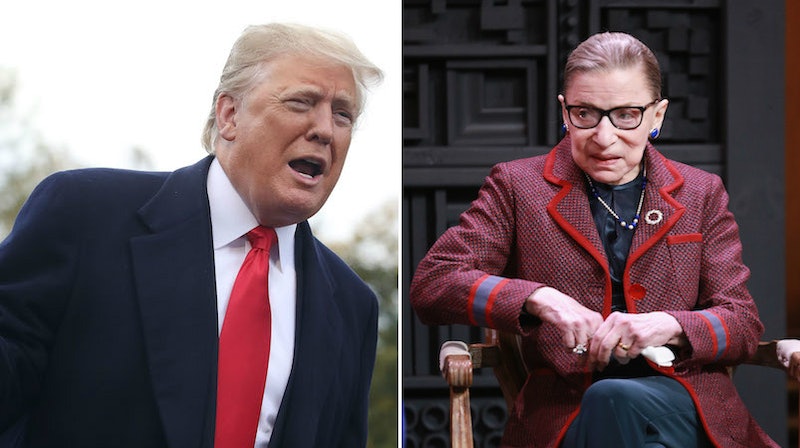 Normally, when a friend is hospitalized we send then our best wishes for improved health and a speedy recovery. Now, while there's certainly nothing to suggest that Supreme Court Justice Ruth Bader Ginsburg and the president are friends, Donald Trump's "get well soon" message to Ginsburg appeared to be more backhanded compliment than a well wish.

A fall in her office sent 85-year-old Ginsburg to the hospital early Thursday where she was treated for three fractured ribs, PBS News has reported. But the Supreme Court justice was already back home, "doing well," and even working remotely Friday, according to a Supreme Court spokesperson, proving there's little that can keep Notorious RBG down for long.

But when asked Friday if he was thinking of another person he could nominate to the Supreme Court in light of Ginsburg's fall, President Trump appeared to slip in some criticisms while wishing Ginsburg a speedy recovery. "No, I wish her well," he told reporters outside the White House. "She said something very inappropriate during the campaign, but she apologized for it."

"I wouldn't say she's exactly on my side," he continued. "But I wish her well. I hope she gets better and I hope she serves on the Supreme Court for many, many years."

Trump is more than likely referencing the time Ginsburg — in what was considered to be a highly unusual moment of public comment for a Supreme Court justice — spoke out critically of him during the 2016 presidential election.

A few weeks later, Ginsburg went so far as to call Trump "a faker" when asked by Supreme Court biographer and CNN legal analyst Joan Biskupic about her initial criticism.

"He is a faker," Ginsburg was reported to have said. "He has no consistency about him. He says whatever comes into his head at the moment. He really has an ego. ... How has he gotten away with not turning over his tax returns? The press seems to be very gentle with him on that."

It didn't take long for Trump to fire back, alleging the Supreme Court justice's mind was "shot" and demanding she resign. "Justice Ginsburg of the U.S. Supreme Court has embarrassed all by making very dumb political statements about me," he tweeted. "Her mind is shot - resign!"

While Ginsburg showed no signs of planning to resign over the incident, she did apologize. "On reflection, my recent remarks in response to press inquiries were ill-advised and I regret making them," The Washington Post reported Ginsburg wrote in a statement. "Judges should avoid commenting on a candidate for public office. In the future I will be more circumspect."

Ginsburg was released from the hospital Friday and, according to a Supreme Court spokesperson, spent the day working from home.