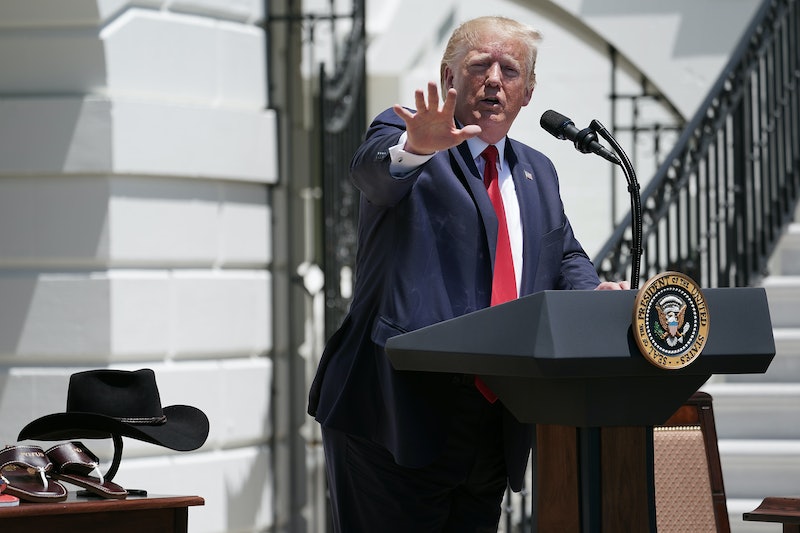 If you've been on Twitter lately, chances are you've seen people asking why Trump's account hasn't been taken down — well, the social media platform recently put those questions to rest. In an official blog post on Oct. 15, the company explained that Trump won't get suspended from Twitter unless he breaks a very specific set of rules.

"When it comes to the actions of world leaders on Twitter, we recognize that this is largely new ground and unprecedented," Twitter stated in a blog post on its approach toward world leaders' accounts. "We understand the desire for our decisions to be “yes/no” binaries, but it’s not that simple." The company stressed that it did not consider world leaders or politicians to be entirely above the same policies that other users are expected to follow. But at the same time, Twitter said, you have to consider context. "Presently, direct interactions with fellow public figures, comments on political issues of the day, or foreign policy saber-rattling on economic or military issues are generally not in violation of the Twitter Rules," the post stated.

Even if a world leader's Tweet does violate Twitter Rules, it won't necessarily be taken down if there is "clear public interest value" in keeping it available to the public. If this is the case, a notice explaining the violation may pop up in place of the tweet and users may have to click through it in order to see the post.

Ultimately, Twitter will only use its "enforcement options" to suspend a world leader's account if that person severely violated a specific set of Twitter rules. These rules include promoting terrorism, making clear and direct acts of violence, posting private or intimate photos or information without that party's consent, promoting child sexual exploitation, or promoting self-harm, according to the app's official blog post. These enforcement options range from limiting a tweet's visibility or removing a tweet to suspending an account altogether. The social media platform determined that Trump's Twitter account is not in direct violation of its policies right now.

Calls to suspend Trump's Twitter account intensified after Democratic presidential candidate Senator Kamala Harris wrote an open letter to Twitter CEO Jack Dorsey insisting that Trump's tweets were putting others in danger. The letter was in response to a series of tweets Trump posted about the whistleblower whose complaint helped spark the impeachment inquiry. "In addition, I want to meet not only my accuser, who presented SECOND & THIRD HAND INFORMATION, but also the person who illegally gave this information, which was largely incorrect, to the 'Whistleblower.'" Trump Tweeted. "Was this person SPYING on the U.S. President? Big Consequences!"

Harris believed the series of Tweets posed a potential threat to the whistleblower. "Trump's tweets about the whistleblower represent a clear intent to harass, intimidate, or silence their voice," she wrote in her letter. "His blatant threats put people at risk — and our democracy in danger. His account must be suspended." And though Harris was adamant in her request, she will not be seeing the results she hoped for at the moment.

More like this
What The UK Blocking Scotland’s Gender Recognition Bill Means
By Sam Ramsden
The UK Government Is *Finally* Banning Conversion Therapy
By Sophie McEvoy
Ashamed Of Your Screen Time Stats? Here's How To Change That
By Alexis Morillo
How To Turn Off TikTok Profile Views So You Can Stalk Other Accounts In Secret
By Alexis Morillo
Get Even More From Bustle — Sign Up For The Newsletter
From hair trends to relationship advice, our daily newsletter has everything you need to sound like a person who’s on TikTok, even if you aren’t.