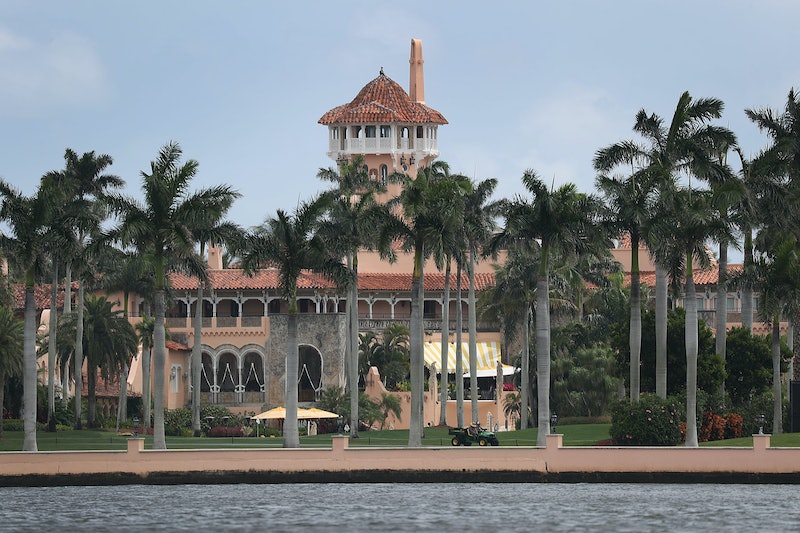 Income for one of the president's most famous clubs, otherwise known as the "winter White House," was noticeably lower in 2018 compared to the year before. Released on Thursday, Trump's 2018 financial disclosure forms reveal different facets of his financial situation, The Washington Post reported. In some cases, the president's hospitality businesses seem to have done well, but it looks like his vacation spot in the Sunshine State might not be doing as well as it used to.

Earnings for the president's Mar-a-Lago resort, located in Palm Beach, Florida, dropped to $22.7 million in 2018, which was a 10% decrease from 2017, the Miami Herald reported. There could be an explanation for this decrement in last year's income. As the Post noted, Trump's controversial rhetoric about a 2017 far-right rally pushed some charities that once hosted events at Mar-a-Lago to distance themselves from the club.

In 2017, for example, three prominent charities — American Red Cross, the Salvation Army, and Susan G. Komen — and multiple others canceled scheduled events at the club in the wake of Trump's comments on the far-right rally in Charlottesville, Virginia, per NPR. The president blamed "many sides" when commenting on the white supremacist demonstration, in which an anti-racism counter-protester was killed.

According to the Post, revenue at some other Trump businesses witnessed "modest" growth in 2018. This included Trump's Bedminster golf club in New Jersey and his golf resort in Northern Virginia.

In general, the Post cautioned readers from viewing these financial disclosures as a complete and whole assessment of Trump's financial situation. That is to say, as the Post noted, these forms still leave out considerable detail. For example, they don't reveal how much profit Trump's companies have made in 2018. They also don't shed light on the income made from Trump's rental property.

But even with these important details missing, these 2018 financial disclosures can help people understand how the president's businesses have performed recently, according to the Post. And it's very likely the forms could even help House Democrats make sense of Trump's financial status.

Earlier in May, the chairman of the House Ways and Means Committee, Massachusetts Democratic Rep. Richard Neal, issued a subpoena that could force Treasury Secretary Steven Mnuchin and Internal Revenue Service Commissioner Charles Rettig to reveal six years of Trump's tax returns. On Wednesday, however, Mnuchin implied at a Senate Appropriations subcommittee hearing that the administration wouldn't comply with the subpoena, per the Hill.

These disclosure forms also seem to contradict what the president's family has said of his collective businesses' performance so far, the Post reported. Earlier in May, Eric Trump, who is the executive vice president of the Trump Organization, stated, "Our company had an exceptional 2018. Our iconic hotels, golf courses, commercial buildings, residential projects and other assets are the best in the world and unrivaled by anyone."

Collectively, Trump's hospitality enterprises have experienced notable financial loss over the last year, the Daily Beast noted. The outlet reported that Trump went from making $387 million across 30 businesses in 2017 to $352 million in 2018. Echoing the Post's analysis, the Daily Beast also noted that Trump's conduct as a president may be affecting his businesses and their earnings.