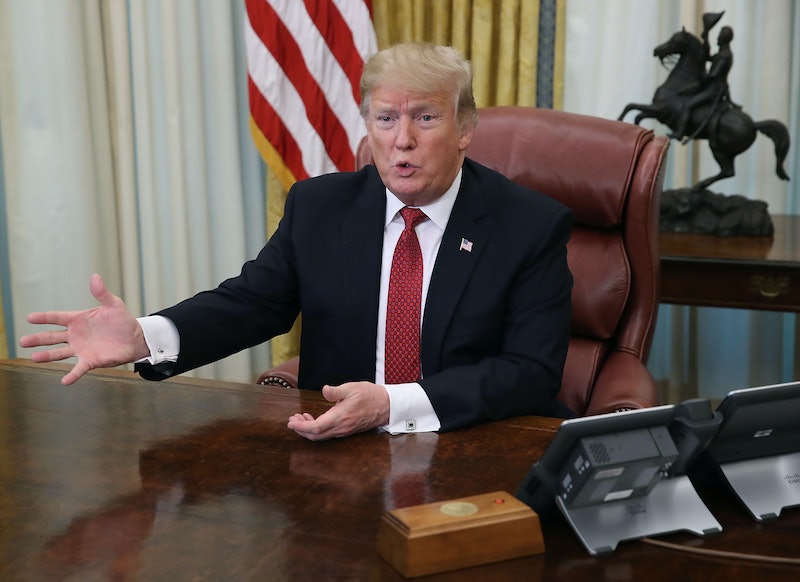 For the third time during his presidency, Donald Trump issued a National African American History Month statement on Thursday in which he celebrated the contributions of black people throughout American history. In his statement, Trump honored key figures such as singer Aretha Franklin and baseball player Jackie Robinson, and announced that the theme for this month would be "Black Migrations."

This theme "highlights the challenges and successes of African Americans as they moved from farms in the agricultural South to centers of industry in the North, Midwest, and West — especially the migrations that occurred in the twentieth century," Trump's statement read.

Trump also paid homage to "inspirational African Americans" from this time period, ranging from businesswoman Annie Turnbo Malone to educators like Mary McLeod Bethune and Booker T. Washington. He concluded his statement by officially proclaiming that February 2019 would be National African American History Month, and calling on "public officials, educators, librarians, and all the people of the United States to observe this month with appropriate programs, ceremonies, and activities."

As USA Today pointed out last year, Trump's commemoration of Black History Month appears to present a contrast to his other remarks on civil rights. For example, Trump has accused black football players of being unpatriotic for kneeling and protesting police brutality during the national anthem, and appeared to defend a white nationalist rally in Charlottesville, Virginia.

However, he has simultaneously touted the decreasing rate of black unemployment during his presidency — which, according to the Associated Press, is something he cannot necessarily take credit for. Despite this, Katrina Pierson — a senior adviser in Trump's 2020 campaign — released a statement this week urging Americans to "rejoice at the economic empowerment that has flourished in the black community more recently."

Trump's own statement, meanwhile, discussed slavery, segregation, migration, and the various ways in which black Americans have challenged racism and prejudice. You can read his full statement below:

In the year 1619, a Dutch trading ship sailed into the Chesapeake Bay and dropped anchor at Point Comfort, Virginia. The vessel’s arrival marked the beginning of the unscrupulous slave trade in the American colonies. It was from this immoral origin—and through inhuman conditions, discrimination, and prolonged hardship—that emerged the vibrant culture, singular accomplishments, and groundbreaking triumphs that we honor and celebrate during National African American History Month.

National African American History Month is an occasion to rediscover the enduring stories of African Americans and the gifts of freedom, purpose, and opportunity they have bestowed on future generations. It is also a time to commemorate the countless contributions of African Americans, many of whom lived through and surmounted the scourge of segregation, racial prejudice, and discrimination to enrich every fiber of American life. Their examples of heroism, patriotism, and enterprise have given people of all backgrounds confidence, courage, and faith to pursue their own dreams.

This year’s theme, “Black Migrations,” highlights the challenges and successes of African Americans as they moved from farms in the agricultural South to centers of industry in the North, Midwest, and West—especially the migrations that occurred in the twentieth century. Through these migrations, millions of African Americans reshaped the demographic landscape of America, starting new lives in cities such as Philadelphia, Detroit, Chicago, and New York City.

In that time of great change, inspirational leaders, such as Annie Turnbo Malone, charted a new path for many African American men and women. Annie Malone, the daughter of former slaves, became one of the most successful entrepreneurs in America at the turn of the century, and provided opportunities for African Americans to pursue meaningful careers. Through mentorship and education, she empowered others to start their own businesses. She is one of many inspirational African Americans in an era that also produced luminaries such as Mary McLeod Bethune and Booker T. Washington, both of whom encouraged and emboldened disenfranchised black students to push through obstacles and realize their God-given potential.

American history brims with the stories of African Americans who forever changed their communities and our country. We will, for example, never forget the legendary “Queen of Soul,” Aretha Franklin, whose unforgettable voice transcended genre and left music transformed, and whose broad appeal in an era of deep division helped to bridge racial divides. Another trailblazer, baseball legend Jackie Robinson, known ubiquitously in Major League Baseball as “42,” shattered institutional racism in American athletics when he became the first African-American player to appear in a big league game. Over his career, his exceptional talent and noble character in the face of racial hatred undermined the twin false ideologies of segregation and racial inequality. The spirit and determination of these and other African American heroes make our Nation proud and define what it means to be American.

National African American History Month is a call to each and every citizen of our great land to reflect on the cultural, scientific, political, and economic contributions of African Americans, which are woven throughout American society. We remember, learn from, and build on the past, so that, together, we can build a better and more prosperous future for all Americans.

NOW, THEREFORE, I, DONALD J. TRUMP, President of the United States of America, by virtue of the authority vested in me by the Constitution and the laws of the United States, do hereby proclaim February 2019 as National African American History Month. I call upon public officials, educators, librarians, and all the people of the United States to observe this month with appropriate programs, ceremonies, and activities.

IN WITNESS WHEREOF, I have hereunto set my hand this thirty-first day of January, in the year of our Lord two thousand nineteen, and of the Independence of the United States of America the two hundred and forty-third.

Trump is not the only political figure who commemorated Black History Month this week. New Jersey Sen. Cory Booker announced on Friday — the first day of Black History Month — that he is running for president in 2020, joining what is expected to be a crowded field of Democrats seeking to replace Trump.