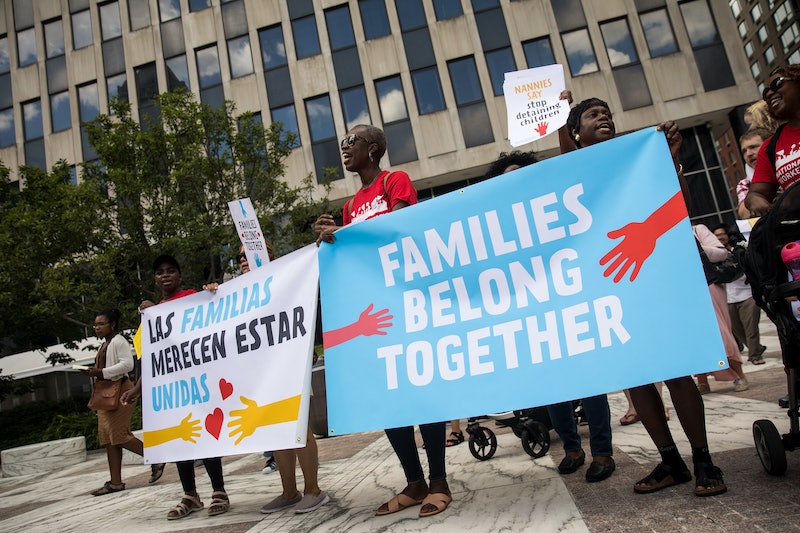 According to the administration, 572 undocumented parents have been deported to their home countries while their children remained detained in the United States since Trump launched his family separation policy earlier in the year. In an interview with Fox News, Homeland Security Secretary Kirstjen Nielsen said that all of those parents voluntarily chose to leave the country without their children; however, an anonymous administration official told Politico that as many as 350 of these parents may not have been given the choice to take their children with them before they were deported.

The ACLU sued over this — and in response, Trump's attorneys are arguing that it's the ACLU's responsibility, not the administration's, to find the deported parents.

“Plaintiffs’ counsel should use their considerable resources and their network of law firms, NGOs, volunteers, and others, together with the information that defendants have provided (or will soon provide), to establish contact with possible class members in foreign countries,” the Department of Justice wrote in a court filing.

The ACLU firmly rejected this argument, telling the court that, although it will do whatever it can do to help the government's relocation efforts, it's ultimately the administration's responsibility.

"The Government must bear the ultimate burden of finding the parents," the ACLU wrote in a court filing. "Not only was it the government’s unconstitutional separation practice that led to this crisis, but the United States Government has far more resources than any group of NGOs (no matter how many NGOs and law firms are willing to try to help)."

At a Senate Judiciary Committee hearing Tuesday, a senior ICE official was asked if the administration has documentation proving that the hundreds of deported parents consented to leaving the country without their children. He repeatedly refused to answer, saying only that immigration officers "make a note" when a parent opts not to be reunited with their children.

“We can go into each file and see the records that are there, whatever paper records are in there, as well as what’s in our electronic system of records, where they will make notes,” Albence said. “The officers will make a note that the parent declined reunification, as well." He also claimed that "great many of these individuals do not wish to have their child return home with them."

Speaking on CNN, Rep. Joaquin Castro condemned the Trump administration for attempting to shift the responsibility of family reunification to a civil rights group that played no role in, and actually opposed, the separations.

"I'm astonished, because the Trump administration told members of Congress directly, and really told the American people, that they knew where every parent and every child was located," Castro said. "Now, they're basically outsourcing the task of finding some of these parents over to the ACLU, and perhaps other groups."

Castro went on, calling this "an astonishing failure by the Trump administration."

"Number one, they lied to us," the Texas congressman said. "Second, they were so incredibly sloppy that they didn't keep track of the parents and the children."