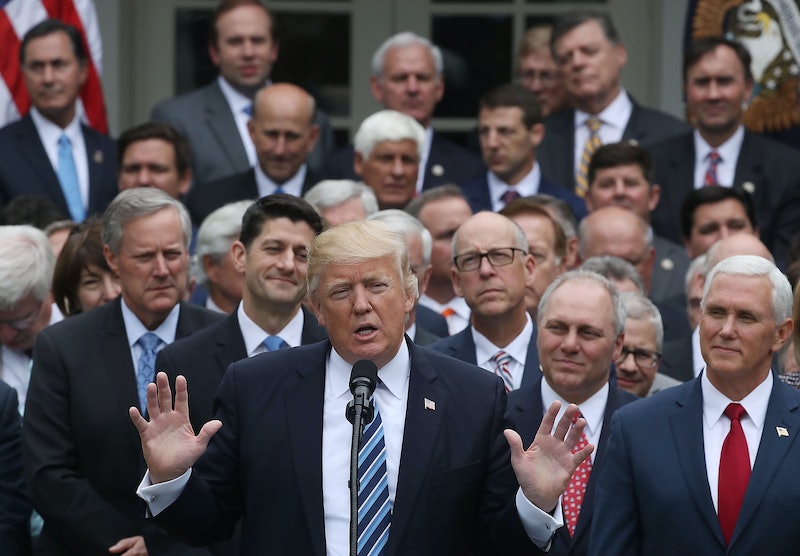 While the Senate is busy revising the Affordable Health Care Act (AHCA), the controversial Obamacare replacement that narrowly passed the House in May, President Trump is busy making their jobs that much more difficult. On Tuesday, he seemed to rescind his support for the plan he once praised. According to the Associated Press, Trump told GOP Senators that the AHCA is "mean."

For context on how bizarre that is, remember for a moment that Trump previously held a celebration in the Rose Garden after the bill passed. Not to mention, he's also called the AHCA "very, very, incredibly well-crafted."

In the month since the bill's passage, Trump's views seem to have changed. At a luncheon on Tuesday, Trump reportedly urged 15 Republican senators to be "more generous" in their restructuring of the health care plan.

The House has passed a bill and the Senate is working very, very hard — and specifically the folks in this room. I appreciate what you're doing — to pass a phenomenal bill for the people of our country. Generous, kind, and with heart. That might mean adding additional money into it.

The Congressional Budget Office previously estimated that the AHCA will cause up to 23 million Americans to lose their health insurance in the next decade, largely because the GOP proposed cutting funding to services like Medicaid. It also suggested slashing protections for people with preexisting conditions. Although many thought the bill was cruel, the president at the time considered the AHCA a "great plan."

Trump did not expand on the particulars of the health care bill that he thinks are "mean," but his insistence on adding more funding could pose a real problem for the bill that was largely intended to cut spending and reduce regulation. According to CNN, the revised AHCA must save the government $133 billion in order to pass the Senate, since that's the amount of money the House bill would have saved. Needless to say, this gives the GOP little wiggle room to make adjustments to funding. Thus, Trump's suggestions have really complicated things.

ABC News reported that White House aides refuse to expand on Trump's comments. Still, they'll be hard for the GOP to dodge as it prepares the AHCA for a Senate vote by July 4. Perhaps if the bill fails, Trump and congressional Republicans will look back fondly on their Rose Garden celebration last month. But that's hard to say, especially considering Trump's tone has certainly changed since then.