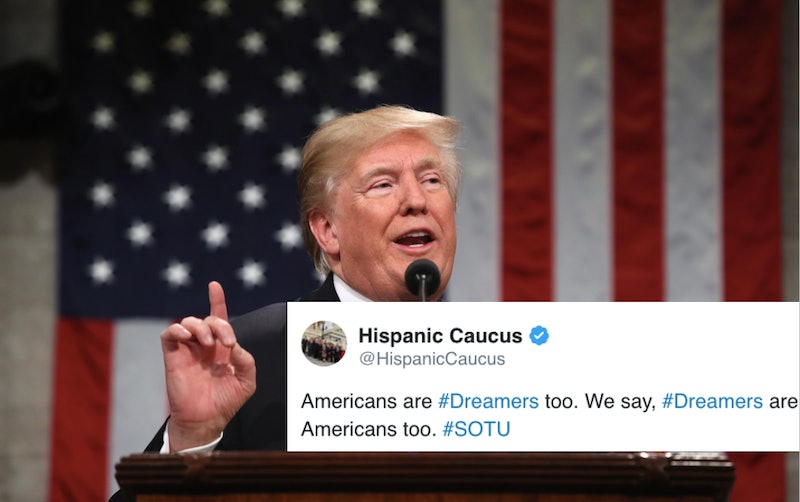 During Tuesday night's State of the Union address, President Donald Trump jabbed at the hundreds of thousands of DACA recipients around the country, remarking that "Americans are dreamers, too." And in a relatively short order, the Congressional Hispanic Caucus responded ― this one tweet shows why Trump's "Americans are dreamers" line is such a problem, and stirring so much controversy.

For weeks, Washington, D.C. have been in the grips of an ongoing political battle over the fate of nearly 800,000 DACA recipients, also know as Dreamers. Undocumented immigrants who were brought into the United States as minors, the Dreamers have been calling for a clean vote on the eponymous Dream Act, a bill which would provide them with protections against deportation and job losses.

Back in Sept. 2017, Trump announced the administration's plan to end the DACA (Deferred Action for Childhood Arrivals) program, with a six-month deadline for Congress to act. That deadline is now looming on March 5, and the Democratic Party is attempting to negotiate a deal to protect those hundreds of thousands of vulnerable, undocumented immigrants. Many of whom, as pro-immigration advocates have frequently noted, have never consciously known any home but America.

After Trump's controversial rejoinder that "Americans are dreamers too," the Congressional Hispanic Causes sent out the following tweet, turning the phrase around on him.

Trump has a long history of inflammatory, xenophobic, and outright racist remarks regarding immigration, including his recent, infamous "sh*thole" comments. At the outset of his presidential campaign ― within the first five minutes of his presidential announcement speech, in fact ― he made widely condemned, broad-brush statements about Mexican immigrants, calling them "rapists" while conceding that "some, I assume, are good people."

He also called for a "deportation force" to round up and kick out undocumented immigrants, pledging that the deportations would start on day one of his presidency. While the rate of deportations actually dipped slightly in 2017, arrests by ICE have risen, and multiple reports have suggested the agency is using increasingly disruptive, aggressive, and controversial tactics.

Trump's actual remarks were met with enthusiastic applause from Republicans in the House chamber, one of many applause lines that saw reactions break down on sharply partisan lines.

My duty, and the sacred duty of every elected official in this chamber, is to defend American, to protect their safety, their families, their communities, and their right to the American dream, because Americans are dreamers too.

Trump has been widely criticized and condemned by pro-immigration activists, advocates, and organizations, and it's safe to say that the tone and substance of Tuesday night's speech did nothing to ease those criticisms.

It remains to be seen what compromise, if any, the Democratic and Republican parties will reach regarding the Dreamers. Last week, details leaked of a White House proposal for a DACA deal, although the details ― providing a long-term pathway to citizenship for DACA recipients, in exchange for deep cuts to legal immigration ― was met with instant controversy both on the right-wing of the GOP, and the left-wing of the Democratic Party.

The proposed deal also included a whopping $25 billion in funding to construct a wall on the southern border of the country, one of Trump's oldest and most frequently repeated campaign promises. it's notable that for more than a year as a candidate, however, he insisted that Mexico was going to pay for it.

In short, Tuesday night's State of the Union was a pretty restrained address by Trump's standards, but still included some lines that raised a lot of people's anger and discontent. And in a single, simple tweet, the Congressional Hispanic Caucus responded in about the best way possible.