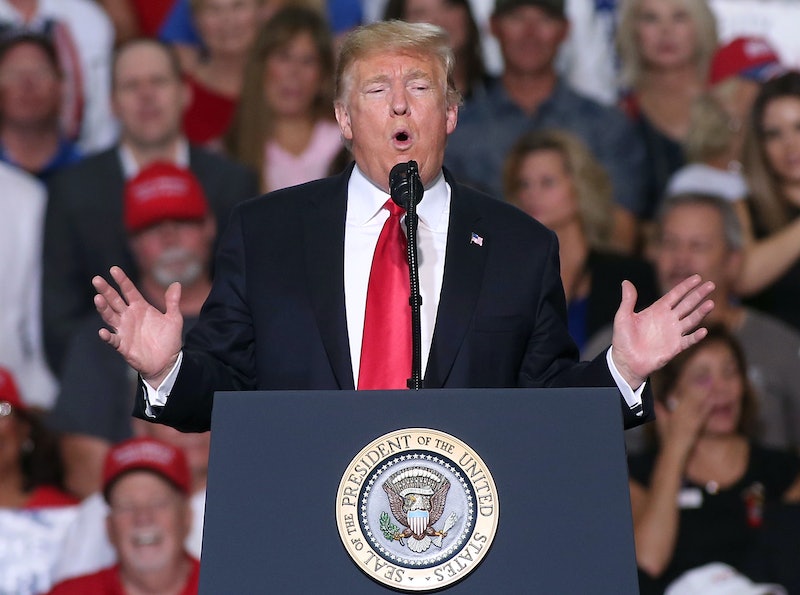 A study released on Monday found that while anti-Muslim campaign rhetoric is on the rise, it's not actually a winning strategy — despite President Trump's 2016 victory. The report was commissioned by Muslim Advocates national legal advocacy and educational organization, and found that these kind of anti-Muslim campaigns are being run in races across the country.

The study found at least 80 such anti-Muslim campaigns across 33 states from local, state, and federal elections. Sixty-four percent of these candidates are what the study classified as "credible candidates," meaning they're incumbents, or appointed or endorsed by the president. (Trump's own anti-Muslim rhetoric while campaigning is well documented — from saying he would consider banning mosques to flirting with the idea of a Muslim registry.)

However, the study suggested that this strategy of anti-Muslim campaign rhetoric is a losing one. The study found that only 11 of the 80 anti-Muslim campaigns studied, or 14 percent, were already elected or are projected to win their races next month. "Almost all" of candidates projected to win by the Cook Political Report forecasting model are "established incumbents," according to the study.

"It is a losing strategy. Most of them are on track to lose, if they haven't already," the report said.

Of the 80 campaigns studies, 73 had a clearly identifiable party affiliation. Of those 73, all but 2 candidates are Republicans. One of those is a Democratic candidate and another is an Independent candidate. "While many factors contribute to election outcomes, the vast majority of anti-Muslim campaigns have ended in failure — even with clearly credible candidates and in places where President Trump is popular," the study found.

The report finds that anti-Muslim rhetoric is "a losing strategy" even among Republicans, however. "They lose more votes than they gain, even among conservatives," the report found. "While anti-Muslim candidates have a constituency within the Republican Party, they are simply out of step with the vast majority of Americans."

The report identified at least 40 congressional candidates that have used anti-Muslim rhetoric as a part of their campaigns. Fifteen such campaigns were seeking municipal offices while another 15 ran for a statewide office like governor, and 10 campaigned for state legislature.

The report specifically highlights one national case of anti-Muslim campaign rhetoric: CA-50. Incumbent Rep. Duncan Hunter (who is under indictment for campaign fund violations) has accused his opponent, Ammar Campa-Najjar, a Democrat, of attempting to "infiltrate Congress" with ties to the Muslim Brotherhood, according to Mother Jones.

Campa-Najjar's chances of winning are slim, according to HuffPost, but that hasn't stopped Hunter's anti-Muslim attacks. The ad claims that Campa-Najjar is a "security risk" despite having a security clearance while working for the Obama administration, according to CNBC.

Campa-Najjar is a Palestinian Mexican American, and a Christian. To be specific, Campa-Najjar is Protestant, according to The San Diego Union-Tribune.

When the ad first aired in September, Campa-Najjar spokesman Nick Singer told the Los Angeles Times that "these are the desperate ravings of a congressman who believes he is above the law and has lost his grip on reality."

Muslim Advocates said it will issue an update to the report after the November midterm elections.