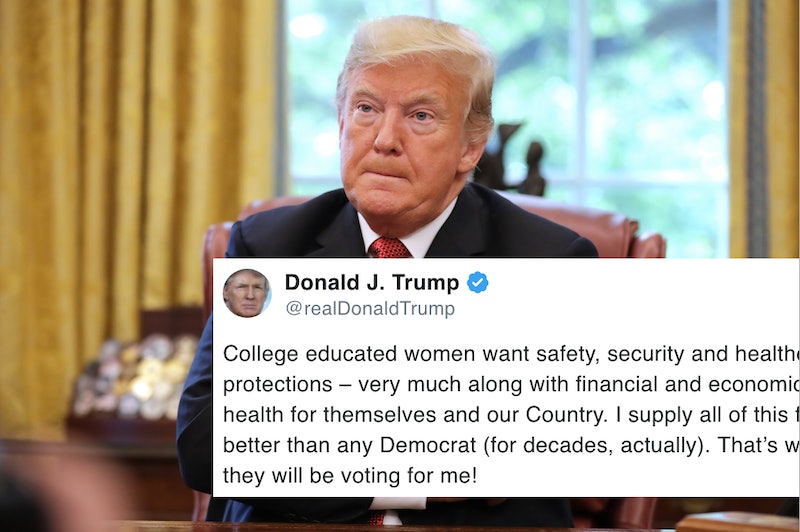 On Wednesday, Donald Trump took to social media to insist that he has the support of college educated women, arguing that this was true because, according to him, he's better at meeting their needs than Democrats. However, data shows that Trump's approval rating among college educated women is not what he says, and that this has been an ongoing issue for Republicans for quite some time.

"College educated women want safety, security and healthcare protections – very much along with financial and economic health for themselves and our Country," he wrote. "I supply all of this far better than any Democrat (for decades, actually). That’s why they will be voting for me!"

Though the tweet does not appear to have been prompted by any single event, polling and past election data indicates that Trump, and the Republican party, actually do not enjoy much support from college educated women at all. This was famously captured in the 2016 election exit polls provided by the National Election Pool, which found that 51 percent of white, college-educated women, as well as 77 percent of non-white, college educated women, voted for Hillary Clinton, instead of Trump.

As the November midterms approach, data suggests that little has changed in that realm, at least where the president's political party is concerned. A Washington Post poll released on Oct. 8 indicates that, among 69 battleground House districts, college-educated white women who are registered to vote prefer Democratic candidates by a 27-point margin. Per the poll, 62 percent of them prefer Democrats, whereas 35 percent prefer Republicans.

Pew Research Polling suggests that this is not a new trend. Over the years, per Pew and as reported by NPR, college-educated women have increasingly identified as Democratic, or Democratic leaning. The latest figures indicate that 65 percent of women with college degrees currently identify as such, whereas 29 percent of women with college degrees identify as Republican, or else Republican-leaning.

Anecdotal reporting by The New York Times in recent months supports these numbers. While Trump has been enjoying an uptick in support from college educated white men, college educated white women appear to increasingly lean toward the Democrats. While in general women are more likely to vote Democrat, according to a multitude of polling, this increases significantly when they hold college degrees.

Why the president suddenly claimed he had the support of college educated women is not immediately clear. While recent polls indicate that this is not true, the figures are by no means groundbreaking. Back in March, NBC, in conjunction with The Wall Street Journal, described Trump's favorability rating among college educated white women as a "dismal 27 percent."

Of course, polls do not have 100 percent accuracy, and do not always indicate how a certain group of people will actually vote when they're in the ballot box. But this trend regarding college educated women is not entirely unique to Trump; instead, it has been steadily building, according to the figures. Additionally, the 2020 election is over two years out. How Republicans fare in the midterms may be the next concrete evidence available regarding how, in fact, college educated women truly vote.